Companies have not turned over documents needed for an investigation. 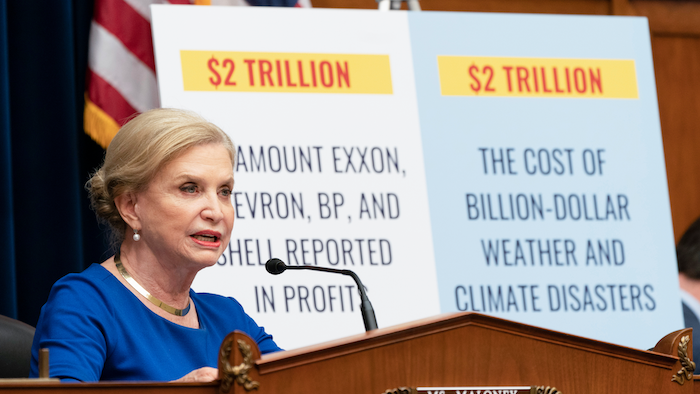 WASHINGTON (AP) — The chairwoman of the House Oversight Committee issued subpoenas Tuesday to top executives of ExxonMobil, Chevron and other oil giants, charging that the companies have not turned over documents needed by the committee to investigate allegations that the oil industry concealed evidence about the dangers of global warming.

Rep. Carolyn Maloney, D-N.Y., said she tried hard to obtain the information voluntarily, but "the oil companies employed the same tactics they used for decades on climate policy — delay and obstruction.''

The subpoenas follow a high-profile hearing last week in which top oil executives denied spreading disinformation about climate change as they sparred with Maloney and other Democrats over allegations that they deliberately misled the public about the risks of global warming.

ExxonMobil CEO Darren Woods testified that his company's public statements on climate “are and have always been truthful, fact-based ... and consistent” with mainstream climate science, a claim Democrats sharply disputed.

In addition to ExxonMobil, the committee issued subpoenas to executives at Chevron, Shell and BP America, as well as the American Petroleum Institute and the U.S. Chamber of Commerce.

Leaders of all six groups appeared at the Oversight hearing last week.

Spokesman Casey Norton said Tuesday that ExxonMobil has been cooperating with the committee for months and has provided nearly 130,000 pages of documents, including internal emails.

J.P. Fielder, a spokesman for BP America, said the company is carefully reviewing the subpoena and will continue working with the committee. BP says it has provided more than 17,000 pages of documents, including internal materials.

Several lawmakers compared last week's remote hearing to a 1994 session with tobacco executives who famously testified that they didn’t believe nicotine was addictive. Maloney and other Democrats sought to pin down oil executives on whether they believe in climate change and that burning fossil fuels such as oil contributes to global warming.

Democrats accused the oil industry of engaging in a decades-long, industry-wide campaign to spread disinformation about the contribution of fossil fuels to global warming.

“They are obviously lying like the tobacco executives were,″ Maloney said of oil executives after hearing their testimony.

Republicans accused Democrats of grandstanding over an issue popular with their base as President Joe Biden’s climate agenda teeters in Congress. Rep. James Comer of Kentucky, the panel's top Republican, dismissed the hearing as "partisan theater for primetime news.''

Democrats for months have been seeking documents and other information on the oil industry’s role in stopping climate action over multiple decades. The fossil fuel industry has had scientific evidence about the dangers of climate change since at least 1977, yet spread denial and doubt about the harm its products cause— undermining science and preventing meaningful action on climate change, Maloney and other Democrats said.

Woods and other oil executives said they agreed with Maloney on the existence and threat posed by climate change, but they refused her request to pledge that their companies would not spend money — either directly or indirectly — to oppose efforts to reduce planet-warming greenhouse gas emissions.