Prosecutors said three companies are responsible for a large share of the firearms found in the city. 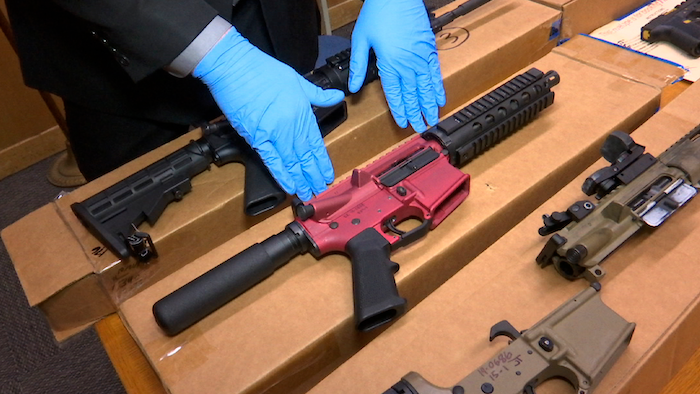 The suit names Blackhawk Manufacturing Group, GS Performance and MDX Corp., three companies that are not based in San Francisco but are responsible for producing a large share of the firearms found in the city and elsewhere in the state, Boudin said.

“Guns are flooding our streets. Enough is enough,” Boudin said. “It is not enough to wait until after someone has been shot and killed by a firearm. We must get to the root of the problem.”

Boudin’s lawsuit comes amid mounting criticism over his response to rising crime rates and a wave of anti-Asian violence in the city, which has been routinely video-recorded and spread virally. Critics say the city’s most powerful law enforcement officer is intolerably lenient, particularly toward those responsible for rampant theft, drug abuse and street crimes.

Critics say Boudin, a progressive who ran on police reform, has repeatedly declined to file charges in cases where the perpetrators went on to commit more serious crimes. Supporters praise him for following through on his criminal justice reform promises.

Like the pandemic, the furor shows no sign of abating. One attempt to recall Boudin fell short last week when organizers failed to collect enough signatures, but the other attempt lives on with a deadline for signatures in October. If voters ultimately oust Boudin, Mayor London Breed, whose politics are more moderate, will choose a replacement.

The lawsuit, filed jointly with the Giffords Law Center to Prevent Gun Violence and law firm Keker, Van Nest & Peters, alleges that the companies violated state laws that require them to apply for serial numbers and that they misled consumers into believing the weapons were legal. It seeks a court order that would bar the companies from shipping their products in California and also seeks monetary penalties.

Messages left with all three companies seeking comment were not immediately returned Wednesday.

Police in San Francisco and other cities across the country have seen an explosion in the numbers of ghost guns seized over the past year.

In 2020, California accounted for 65% of all ghost guns seized by the Bureau of Alcohol, Tobacco, Firearms and Explosives, a statement from Boudin's office said.

The companies named in the San Francisco lawsuit tout on their websites how little time it takes to build their guns and that no background checks are needed, said Hannah Shearer, litigation director at Giffords Law Center, which is co-counsel in the case.

“They’ve made it possible for anyone in the state to buy all the parts needed to build a firearm, no questions asked and get it shipped in a convenient package with instructions, like an Ikea piece of furniture,” said Shearer.

How AI-Powered Tech Landed Man in Jail with Scant Evidence