It counters a decision to lift restrictions on logging and road-building in the southeast Alaska rainforest. 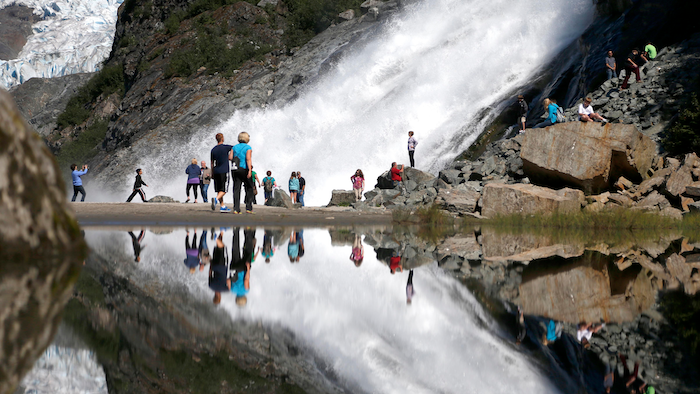 In this July 31, 2013, file photo, tourists visiting the Mendenhall Glacier in the Tongass National Forest are reflected in a pool of water as they make their way to Nugget Falls in Juneau, Alaska. The Biden administration said Thursday, July 15, 2021, that it is ending large-scale, old-growth timber sales on the nation's largest national forest.
AP Photo/Charles Rex Arbogast, File

WASHINGTON (AP) — The Biden administration said Thursday that it is ending large-scale, old-growth timber sales in the country's largest national forest — the Tongass National Forest in Alaska — and will focus on forest restoration, recreation and other noncommercial uses.

The U.S. Agriculture Department, which includes the Forest Service, also said it will take steps to reverse a Trump administration decision last year to lift restrictions on logging and road-building in the southeast Alaska rainforest, which provides habitat for wolves, bears and salmon.

A 2001 rule prohibits road construction and timber harvests with limited exceptions on nearly one-third of national forest land. The Trump administration moved to exempt the Tongass from those prohibitions, something Alaska political leaders had sought for years.

Restoring those protections in the Tongass would return “stability and certainty to the conservation of 9.3 million acres of the world’s largest temperate old growth rainforest,” the Agriculture Department said. It expects to initiate a rulemaking process next month that will include a chance for public comment, Forest Service spokesperson Larry Moore said.

Under the plans announced Thursday, large-scale, old-growth projects that were being planned for the forest will not go forward, Moore said. Smaller timber sales, including some old-growth trees, will still be offered for local and cultural uses such as totem poles, canoes and tribal artisan use, the Agriculture Department said.

“Old-growth forests are critical to addressing climate change, so restoring roadless protections to the Tongass is critical," said Andy Moderow of the Alaska Wilderness League, calling the forest an “unmatched treasure.”

“We need to hang on to what we have,” Spivak said of old-growth trees, her voice cracking. “You cannot replace them, not in our lifetime.”

Plans for the Tongass follow a decision by the Biden administration to suspend oil and gas leases in Alaska’s Arctic National Wildlife Refuge. A 2017 tax-cut law passed by congressional Republicans called for two lease sales to be held in the refuge. A January lease sale in the refuge drew a tepid response.

In an action that angered environmentalists, the Biden administration has defended a Trump-era decision to approve a major oil project on Alaska’s North Slope that state leaders have supported.

More than 9 million of the Tongass’ roughly 16.7 million acres are considered roadless areas, according to a federal environmental review last year. The majority of the Tongass is in a natural condition, and the forest is one of the largest relatively intact temperate rainforests in the world, the review said.