The group is comprised of 11 Republicans and 10 Democrats. 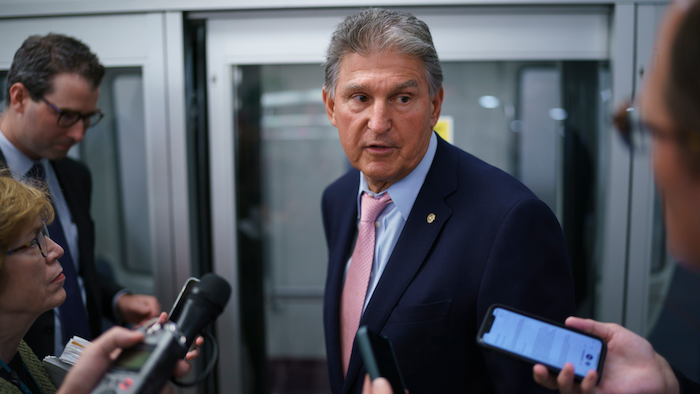 Sen. Joe Manchin, D-W.Va., a key infrastructure negotiator, pauses for reporters after working behind closed doors with other Democrats in a basement room at the Capitol in Washington, Wednesday, June 16, 2021.
AP Photo/J. Scott Applewhite

WASHINGTON (AP) — A bipartisan senators’ group working on a $1 trillion infrastructure compromise more than doubled in size to 21 members Wednesday, a key threshold that gives momentum to their effort as President Joe Biden returns from overseas at a pivotal time for his big legislative priority.

Biden told reporters he had yet to see the emerging proposal from the group but remained hopeful a bipartisan agreement could be reached, despite weeks of on-again, off-again talks over his more robust $1.7 billion American Jobs Plan.

“I’m still hoping we can put together the two bookends here,” Biden said as he prepared to depart Geneva after attending a summit of European leaders.

The administration dispatched top White House advisers for back-to-back meetings on Capitol Hill while the president was away. Biden and his Democratic allies in Congress are proceeding on a two-track strategy — seeking a bipartisan bill while preparing to go it alone if Republicans try to block the investments with a filibuster in the Senate.

The administration officials huddled late Wednesday in the Capitol basement with the Democratic senators in the bipartisan group, grinding through details of the proposal. On Tuesday, the White House team shored up restless House Democrats eager for momentum on a shared domestic priority with the president.

Ahead of Wednesday’s late afternoon session, the 20 senators issued a joint statement backing the emerging bipartisan proposal, doubling their ranks in a show of momentum as Biden is expected to re-engage at home. The list was later updated to 21.

The number is significant: With 11 Republicans and 10 Democrats the group for the first time shows the potential for a bipartisan accord that could theoretically reach the 60-vote threshold in the Senate, which is now evenly split 50-50, that’s needed to advance bills.

“We support this bipartisan framework that provides an historic investment in our nation’s core infrastructure needs without raising taxes,” the senators said. “We look forward to working with our Republican and Democratic colleagues to develop legislation based on this framework to address America’s critical infrastructure challenges.”

At the same time, Senate Majority Leader Chuck Schumer convened a private meeting of the Democratic senators on the Budget Committee to set the groundwork for a process that would allow majority passage of the package, without the need for Republican votes. Initial votes could start in July.

“There was universal agreement we have a lot of things we have to do to help the American people and we have to have unity to do it,” Schumer told reporters afterward. “Good first meeting.”

Biden has proposed a historic investment in U.S. infrastructure, spending that goes beyond roads and bridges to include efforts to fight climate change and to shore up what the White House calls the human infrastructure of everyday life — child care centers, veterans hospitals, community colleges and elder care.

Together, the American Jobs Plan and the $1.8 trillion American Families Plan make up a wish-list of Democratic priorities that most Republicans say are investments that go far beyond what they are comfortable spending.

As an alternative, the bipartisan group is eyeing a scaled-back nearly $1 trillion proposal that includes about $579 billion in new spending, including $110 billion on roads and highways, $66 billion on passenger and freight rail and $48 billion on public transit, according a Republican who requested anonymity to discuss the package. There’s another $47 billion on resiliency efforts to fight climate change and money for electric vehicle charging stations.

Biden has proposed raising taxes on corporations, from 21% to 28%, to fund the jobs plan, and increasing taxes on wealthy Americans earning more than $400,000 for the other investments — tax hikes Republicans flatly oppose.

Instead, the bipartisan group suggests tapping $120 billion in unspent COVID-19 relief funds and $315 billion from the Paycheck Protection Program that was designed to help businesses pay workers during the coronavirus lockdowns. They also proposed going after tax dodgers by bolstering the Internal Revenue Service.

One source of contention in the bipartisan group is over a proposal to hike gas taxes by linking future increases to inflation — an idea many other Democrats oppose and that goes against Biden’s vow not to tax Americans earning less than $400,000. The bipartisan group was also eyeing a fee on electric vehicle users.

The bipartisan group includes some of the most watched members of the Senate, some known for reaching across the aisle or bucking their party to strike deals.

On the Democratic side are Sens. Chris Coons of Delaware, Maggie Hassan of New Hampshire, John Hickenlooper of Colorado, Mark Kelly of Arizona, Joe Manchin of West Virginia, Jeanne Shaheen of New Hampshire, Kyrsten Sinema of Arizona, Jon Tester of Montana, Mark Warner of Virginia and Angus King of Maine, an independent who caucuses with Democrats.

Senators appeared upbeat over the prospect that talks on the two tracks could progress — one not precluding the other, as Biden tries to secure a big legislative achievement.

Sen. Tim Kaine, D-Va., said the Budget Committee was unified in putting together a package that “gives us a latitude to do what we need to do — we can shrink it if there’s a bipartisan deal, we could do the broader deal if there isn’t.”

Sen. Bernie Sanders, the Vermont independent who is chairman of the Budget Committee, told reporters that lawmakers “have an enormous amount of work in front of us.”