The Greenpeace campaign used AGL's logo as an acronym for 'Australia's Greatest Liability.' 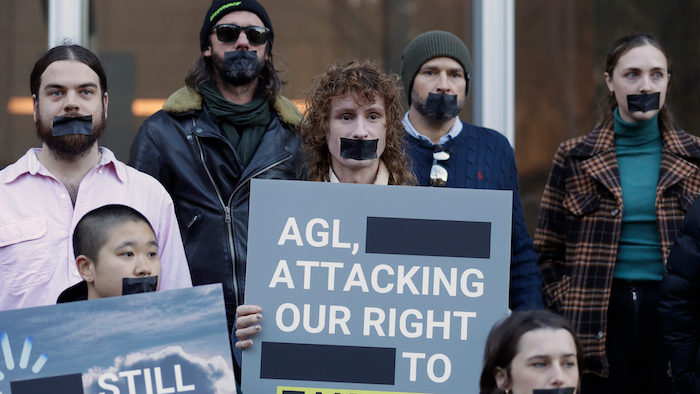 Greenpeace supporters demonstrate outside the Federal Court in Sydney, Wednesday, June 2, 2021. Australia's largest electricity generator on Tuesday, June 8, 2021, largely lost its court case alleging that the environmental group Greenpeace had breached copyright and trademark laws by using its logo in a campaign that described the company as the nation's "biggest climate polluter."
AP Photo/Rick Rycroft

CANBERRA, Australia (AP) — Australia’s largest electricity generator on Tuesday largely lost its court case alleging that the environmental group Greenpeace had breached copyright and trademark laws by using its logo in a campaign that described the company as the nation’s “biggest climate polluter.”

Greenpeace had argued the Federal Court case had significant implications for charities and advocacy groups. Greenpeace also described AGL as the latest fossil fuel corporation to seek to stifle dissent through litigation.

In the online advertising campaign, Greenpeace Australia Pacific accused AGL, which predominantly generates coal-fired electricity, of “greenwashing” by promoting itself as a leading investor in renewable energy. The campaign used the AGL logo and featured the slogan, “AGL – Australia’s Greatest Liability.”

Greenpeace lawyer Katrina Bullock said Tuesday's decision was a win for freedom of expression and set an important legal precedent in copyright law.

“Today’s legal victory is good news for charities, advocacy organisations, satirists and anyone else who seeks to rely on the ‘fair dealing’ freedom of speech safeguard in the Copyright Act to criticise, review, satirise or parody powerful corporations,” Bullock said in a statement.

Greenpeace plans to continue its campaign to pressure AGL to close its three coal-burning power stations by 2030.

AGL released a statement welcoming the parts of the case decided in its favor.

“As we’ve always made clear, this legal action was about the integrity of how our brand is used,” AGL said.

AGL unsuccessfully applied for an interim court order in early May that would have forced Greenpeace to stop using the logo.

Greenpeace argued during a one-day hearing last week that Australian trademark law allows for the logo to be used for satire, parody and criticism.

AGL lawyer Megan Evetts told the court there was a “clear intention to harm the brand” through the Greenpeace campaign.

Greenpeace lawyer Neil Murray told the court the campaign did not breach the law because it did not use the AGL trademark in a trade context and its motives were “pure.”

AGL accepted in its latest annual report that it was Australia’s largest greenhouse gas emitter with plans to continue generating electricity by burning coal until 2048, Murray said.

The campaign was aimed at ending Australian reliance on coal-fired power by 2030 as recommended by the Intergovernmental Panel on Climate Change.

Greenpeace and AGL must return to court on Wednesday to offer wording for orders to give the judge’s verdict effect.