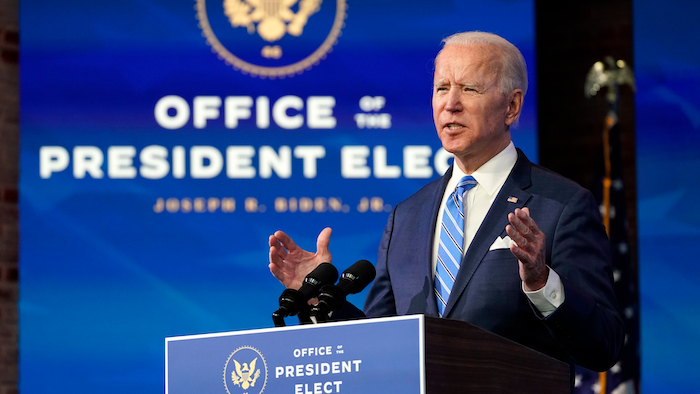 President-elect Joe Biden speaks about the COVID-19 pandemic during an event at The Queen theater, Thursday, Jan. 14, 2021, in Wilmington, Del.
AP Photo/Matt Slocum

WILMINGTON, Del. (AP) — Getting 100 million shots in Americans' arms in his first 100 days is only the beginning of his coronavirus plan, President-elect Joe Biden declared Friday. Lasting impact, he said, will come from uniting the nation in a new effort grounded in science and fueled by billions in federal money for vaccination, testing and outbreak sleuths.

Biden spoke a day after unveiling a $1.9 trillion “American Rescue Plan” to confront the virus and provide temporary support for a shaky economy. About $400 billion of the plan is focused on measures aimed at controlling the virus. Those range from mass vaccination centers to more sophisticated scientific analysis of new strains and squads of local health workers to trace the contacts of infected people.

On Friday, Biden pledged to maximize the available supply of vaccines and materials needed to administer them, using a Cold War-era law called the Defense Production Act to direct private manufacturing.

He also seconded the Trump's administration's call earlier this week for states to start vaccinating more seniors, reaching those 65 and older as well as younger people with certain health problems. Until now states have been focused on inoculating health care workers, and some are starting to vaccinate people 75 and older. Relatively few are providing shots to people between 65 and 75.

“At this point, mass vaccination is our last and best chance to restoring normalcy,” she said. “There should be no expenses spared in the vaccine rollout. A hundred million in 100 days needs to be seen as only a start."

As Biden spoke, some governors blasted the Trump administration for what at least one said was “deception” in suggesting earlier this week a reserve of vaccine doses was ready to ship, augmenting supplies. An administration official said states have still not ordered all of the doses allocated to them, and called it a problem with states' expectations.

Biden committed to better communication with the states, to avoid surprises about how much vaccine they can expect. His plan calls for the federal government to fully reimburse states that mobilize their National Guard to help distribute vaccines.

The political outlook for Biden's rescue plan remains unclear, although a powerful business lobbying group welcomed its focus on controlling the pandemic.

Biden has long held that economic recovery is inextricably linked with controlling the coronavirus.

That squares with the judgment of the U.S. Chamber of Commerce, the most powerful business lobbying group and traditionally an adversary of Democrats. “We must defeat COVID before we can restore our economy and that requires turbocharging our vaccination efforts,” the Chamber said in a statement Thursday night that welcomed Biden's plan but stopped short of endorsing it.

The plan comes as a divided nation is in the grip of the pandemic’s most dangerous wave yet. So far, more than 389,000 people have died of COVID-19 in the U.S.

Under Biden's multipronged virus strategy, about $20 billion would be allocated for a more disciplined focus on vaccination, on top of some $8 billion already approved by Congress. Biden has called for setting up mass vaccination centers and sending mobile units to hard-to-reach areas.

On Friday, he announced former FDA chief David Kessler as his chief science officer for the vaccine drive. Kessler has been advising Biden as a co-chair of his advisory board on the coronavirus pandemic. A pediatrician and attorney, he has emphasized the need to ease public concerns about the safety of the coronavirus vaccines. Confidence in the FDA’s review process is critical to ramping up the effort to vaccinate millions of Americans.

With the backing of Congress and the expertise of private and government scientists, the Trump administration delivered two highly effective vaccines and more are on the way. Yet a month after the first shots were given, the nation’s vaccination campaign is off to a slow start with about 12.3 million doses administered out more than 31 million delivered, or 39%.

About 10.6 million individuals have received first or second doses, according to the Centers for Disease Control and Prevention. But the American Hospital Association estimates that close to 246 million must be vaccinated to reach widespread or “herd” immunity by the summer. Vaccines currently available require to shots to be fully effective.

Biden has called the vaccine rollout “a dismal failure so far."

“We need to be getting to more than 3 million vaccinations a day, rapidly,” said Wen.

The plan also provides $50 billion to expand testing, which is seen as key to reopening most schools by the end of the new administration's first 100 days. About $130 billion would be allocated to help schools reopen without risking further contagion.

The plan would fund the hiring of 100,000 public health workers, to focus on encouraging people to get vaccinated and on tracing the contacts of those infected with the coronavirus.

There's also a proposal to boost investment in genetic sequencing, to help track new virus strains including the more contagious variants identified in the United Kingdom and South Africa.

Throughout the plan, there's a focus on ensuring that minority communities that have borne the brunt of the pandemic are not shortchanged on vaccines and treatments, aides said.

With the new proposals comes a call to redouble efforts on the basics.

Biden is asking Americans to override their sense of pandemic fatigue and recommit to wearing masks, practicing social distancing and avoiding indoor gatherings, particularly larger ones. It's still the surest way to slow the COVID-19 wave, with more than 4,400 deaths reported just on Tuesday.