The company would no longer receive a 40% tax break from Washington state. 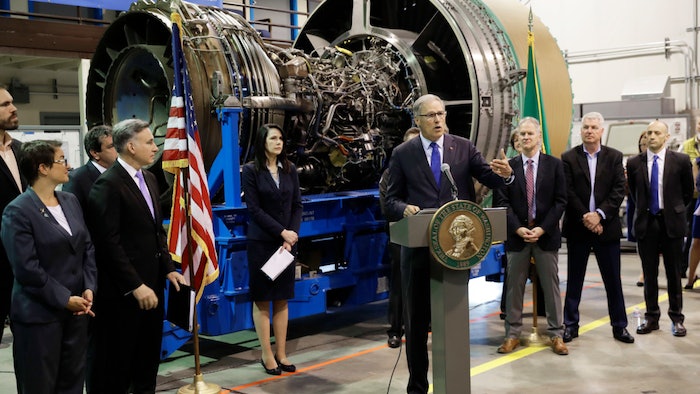 Democratic Sen. Marko Liias and Democratic House Majority Leader Rep. Pat Sullivan are the sponsors of the companion bills in the Senate and House. Under the legislation, starting on April 1, the company will no longer receive the 40% tax break that the Legislature adopted for the aerospace industry in 2003, which was expanded in 2013.

The decision by the WTO’s appellate body considered whether the United States had complied with a 2012 ruling that found that plane-maker and defense company Boeing received at least $5 billion in subsidies prohibited under international trade rules.

But the ruling was limited and the decision found no grounds upon which the European bloc could seek damages from an arbitrator, except for the relatively small Washington state tax program — which the U.S. says was worth $100 million a year.

In a statement, Boeing spokesman Bryan Watt said Wednesday that the company advocated for and supports the legislative action to “resolve the sole finding against the United States in the long-running trade disputes between Europe and the United States over government support for the production of large commercial airplanes."

"This legislation demonstrates the commitment of Washington — and of the United States — to fair and rules-based trade, and to compliance with the WTO’s rulings,” he said.

In December, a WTO panel ruled that the European Union has not complied with an order to end illegal subsidies for plane-maker Airbus, which prompted the Trump administration to impose tariffs on nearly $7.5 billion worth of EU goods in October.

"Now is the time for Airbus and the European Union to finally come into compliance by ending illegal launch aid subsidies once and for all and addressing the harm they have caused the United States aerospace industry and its workers,” Watt said.

Liias said in a statement a legislative solution was a “critically important issue for our state’s economy.”

“We share Boeing’s concern that retaliatory tariffs will hurt not only our state’s aircraft industry, but other Washington-based exporters and family-wage jobs here in Washington,” Liias wrote.

Sullivan said that that goal of the legislation is to "protect family-wage, good-paying jobs provided by the aerospace industry and other sectors that will be impacted by tariffs if the legislature does not act this session.”

Gov. Jay Inslee said he would be working with lawmakers and Boeing officials to expedite the bill.

“There is broad agreement in Olympia that we need to act this session to address the WTO issue in order to avoid retaliatory tariffs that would damage not just our commercial aircraft industry, but other important Washington exports,” he said in a written statement.

The bills are not subject to normal legislative deadlines because they’re considered necessary to implement the budget. The 60-day legislative session ends March 12.