One of those suspected of assisting in Ghosn's escape is a former Green Beret. 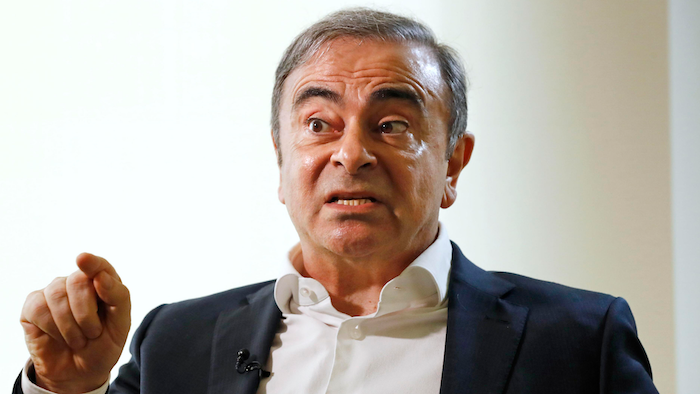 TOKYO (AP) — Tokyo prosecutors issued an arrest warrant Thursday for Nissan's former chairman Carlos Ghosn, who skipped bail while awaiting trial in Japan and is now in Lebanon. Japan has no extradition treaty with Lebanon, so he's unlikely to be arrested. Lebanon has indicated it will not hand over Ghosn.

Tokyo prosecutors also issued arrest warrants for three Americans they said helped and planned his escape, Michael Taylor, George-Antoine Zayek and Peter Taylor. Deputy Chief Prosecutor Takahiro Saito declined to say where the three men were thought to be staying. He said Michael Taylor and George Zayek are suspected of helping Ghosn flee by hiding him in cargo at a Japanese airport and getting him into a private jet to leave the country.

Saito would not say if Japan has asked U.S. authorities for help, though he said all options were being explored. Japan and the U.S. have an extradition treaty. Michael Taylor is a former Green Beret and private security specialist. Peter Taylor appears to be his son. Security footage released earlier showed Zayek and Taylor transiting Istanbul Airport at the same time Ghosn allegedly passed through Turkey on his way to Beirut.

Prosecutors suspect Peter Taylor met several times with Ghosn in Tokyo, starting in July last year, to plot his escape. Saito said Ghosn was given a key to a hotel room in Osaka near the Kansai Airport that Ghosn left from. Prosecutors say Ghosn broke the law by violating bail conditions that required him to stay in Japan, mostly at his Tokyo home.

"We want to stress that the act of fleeing was clearly wrong," Saito told reporters. "We need to erase the misunderstanding."

Separately, Saito said prosecutors on Wednesday forced open a lock to search the Tokyo office of Ghosn's former defense lawyer Junichiro Hironaka for records of people Ghosn met with while out on bail, and other materials. Prosecutors are asking a judge for help in accessing contents of a computer Ghosn used at Hironaka's office that the lawyer has refused to hand over, citing attorney-client privilege.

Ghosn has said he is innocent of allegations he under-reported his future income and committed a breach of trust by diverting Nissan money for his personal gain. He says the compensation was never decided on or received, and the Nissan payments were for legitimate business purposes.

Ghosn has lashed out at the Japanese judicial system, saying he fled because he could not expect a fair trial, was subjected to unfair conditions in detention and was barred from meeting his wife under his bail conditions. He contends others at Nissan Motor Co., which he led for two decades, drove him out to prevent a fuller merger with its French alliance partner Renault.

Ghosn's dramatic escape, while under the watch of surveillance cameras inside and outside his home is an embarrassment for Japanese authorities. He is believed to have traveled by train to Osaka and then left via Kansai Airport, reportedly by hiding in a box for audio or musical equipment. Ghosn has not shared specifics of his escape.