The FAA didn't delegate too much safety analysis for the plane to Boeing. 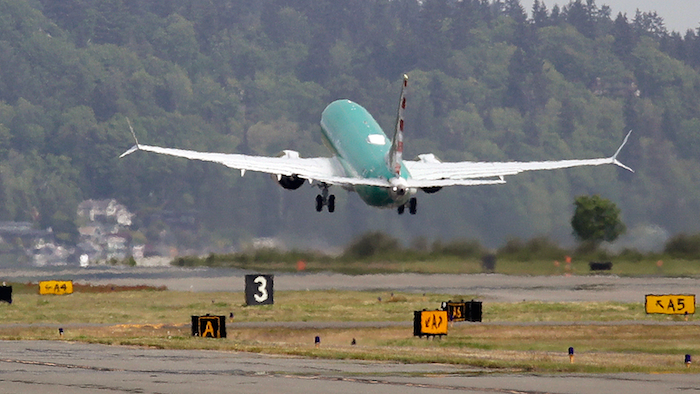 In this May 8, 2019, file photo a Boeing 737 MAX 8, being built for American Airlines, is partially obscured by the engine wash as it takes-off on a test flight in Renton, Wash. A government committee reviewing how the Federal Aviation Administration certifies new passenger planes for flight has determined that the system is safe and effective but small changes need to be made. The committee was appointed by Transportation Secretary Elaine Chao in April after two deadly crashes involving Boeing's 737 Max.
AP Photo/Elaine Thompson, File

A government advisory committee has concluded that federal regulators followed established procedures when they certified the Boeing 737 Max and did not delegate too much safety analysis for the plane to Boeing.

In a report Thursday, the panel said the FAA correctly treated the Max as an update to older 737s and not as a new type of plane, which would have subjected it to more examination.

The committee was appointed by Transportation Secretary Elaine Chao in April, after crashes in Indonesia and Ethiopia killed 346 people. It gave high marks overall to FAA’s process for certifying planes, calling it safe and effective and a boost to the U.S. aerospace industry.

The committee’s findings differ sharply from those of legislators who are investigating Boeing and the FAA. Key lawmakers have said they may try to stop the FAA from letting Boeing do some inspections and safety analysis on its own planes.

“I want to be very clear: 346 people died because the system failed,” DeFazio said. He said it would be irresponsible to make no changes “and just hope for the best the next time.”

Michael Stumo, whose daughter Samya was on the Max that crashed in Ethiopia, said the new report endorsed self-regulation by Boeing.

“This report is written as if by pre-crash industry lobbyists defending the current certification system,” he said.

The top Republican on the Transportation Committee praised the report, however. It confirms that the U.S. remains “the global gold standard for aviation safety,” and the current certification system does not need to be rebuilt because of the Max crashes, said Sam Graves of Missouri.

Boeing and the FAA said in brief statements that they would review the committee’s findings.

Investigations into Boeing have revealed internal documents in which Boeing employees raised safety alarms about the Max while it was being developed and admitted misleading regulators. Lee Moak, a former airline pilot and union president who co-chaired the Chao-appointed committee, said the panel did not consider those messages.

“It was not the purview of, or charter of, the committee to look at or investigate email traffic,” Moak told reporters.

The committee wrote in its report that its mission was “to collect and analyze information, not find fault.” The panel concluded that the FAA’s system of delegating some safety work to aircraft manufacturers is “rigorous” and overseen by engineers and others who are committed to safety.

Asked about possible mistakes in FAA’s certification of the Max, Moak said that was for other groups to investigate.

The panel made some recommendations for changes, however, including more analysis of how pilots react in emergency situations.

Lawmakers and the families of passengers killed in the crashes have said that the 737, which dates to the 1960s, has changed so much over the years that the FAA should have considered the Max to be a new aircraft type. That would have triggered a nose-to-tail certification of every system on the plane.

The committee wrote that treating the Max as a new aircraft “would not have produced a safer airplane.”

Investigators have implicated new automated flight control software called MCAS as a factor in the crashes. In each crash, a single faulty sensor caused the system to activate and push down the nose of the plane. Boeing did not tell pilots about MCAS until after the Indonesian Lion Air crash, and regulators at the FAA didn’t know much about it.

In October, a panel of international aviation regulators found that Boeing changed the design of MCAS, making it more powerful, without telling the FAA. The panel said that if FAA experts knew more about how the system worked, they likely would have seen that it could overpower pilots' efforts to stop the nose-down pitch.