The company will pay $69.5 million after dumping hazardous waste near private wells years ago. 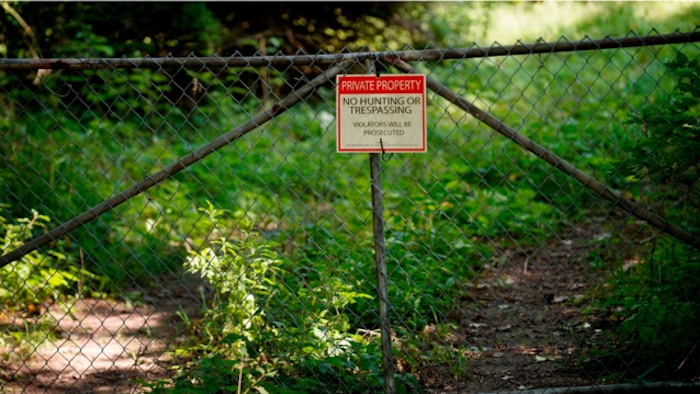 In this Wednesday, Aug. 16, 2017 file photo, a "No trespassing" sign is displayed at an old tannery waste dump used by Wolverine World Wide in Belmont, Mich. Some private wells in the area have tested positive for elevated levels of per- and polyfluoroalkyl substances called PFAS, also called perfluorinated chemicals, or PFCs. Michigan, where the large city of Flint continues to recover from a lead-tainted water supply, is now racing to combat a new threat to tap water at sites across the state: chemicals long used in firefighting, waterproofing, carpeting and other products.
Neil Blake, The Grand Rapids Press via AP

The tentative deal between Plainfield and Algoma townships and Wolverine World Wide calls for the company to pay $69.5 million toward extending a municipal water system to about 1,000 homes. Those homes with private wells north of Grand Rapids — near where Wolverine dumped hazardous waste decades ago — were affected by the contamination.

The chemicals, known collectively as PFAS long were used in scores of industrial applications, don't break down easily and can migrate from soil to groundwater. Some studies have found the chemicals can be harmful to human health.

The deal also includes what's described as “comprehensive remediation plans” at the former tannery site along with additional studies and monitoring. Additionally, the company would continue to maintain water filters for homeowners without municipal water whose PFAS levels were over 10 parts per trillion, and provide some money for a filtration system for a water plant.

According to a news release, all parties have signed the agreement in principle but a final version still needs the approval of a judge. Once that's done, township officials say, they expect work to begin next spring and it would take about five years to complete.

Wolverine provided roughly 500 whole-house filters and about 200 point-of-use filters to residents with high concentrations of the contaminant in their well water. The company agreed to maintain the house filters until the homes are connected to municipal water.

A final deal would end the lawsuit among the parties, which also includes the state of Michigan, but not cases filed against the company by some residents. Wolverine said in a separate statement it believes actions it's taking as part of the tentative settlement could resolve other cases.

Wolverine said the lawsuit it filed last year against Minnesota-based chemical manufacturer 3M continues with mediation discussions. Wolverine has said 3M concealed information about the potential environmental risks of chemicals in Scotchgard and other products, while 3M countered it acted responsibly.