Purdue says maintaining its bonus program is essential to keep employees on the job and performing. 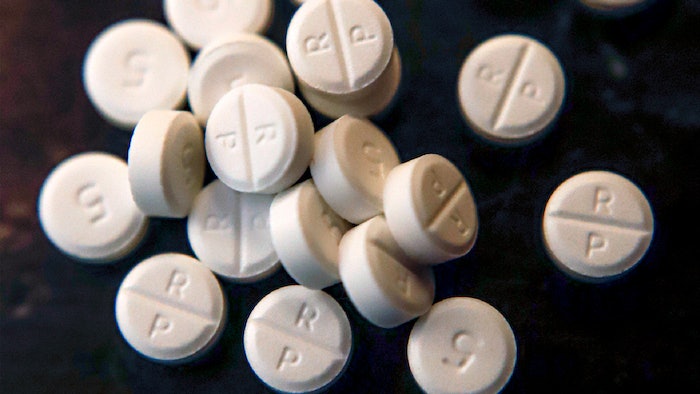 This June 17, 2019, file photo shows 5-mg pills of Oxycodone. The judge overseeing the bankruptcy case of OxyContin maker Purdue Pharma will consider Wednesday, Dec. 4, 2019 whether the company's CEO should get a bonus equal to half his $2.6 million salary.
AP Photo/Keith Srakocic, File

The judge overseeing the bankruptcy case of OxyContin maker Purdue Pharma will consider Wednesday whether the company's CEO should get a bonus equal to half his $2.6 million salary.

Attorneys general representing about half the states say the company's chief executive Craig Landau shouldn't get a bonus, arguing in court filings that he bears some responsibility for the national opioid epidemic that they say the company's signature painkiller helped fuel.

“Purdue should not award bonus payments to Landau before resolving the allegations that Landau committed deadly, illegal misconduct,” the states said in a filing this week.

A hearing is scheduled Wednesday afternoon in U.S. Bankruptcy Court in White Plains, New York, where the company has sought protection from creditors as it tries to settle 2,700 lawsuits it faces over the toll of opioids.

Purdue said maintaining its bonus program is essential to keep employees on the job and performing. If the company falls apart, it would mean less money left over to address the opioid crisis for the states, local governments, Native American tribes, medical providers and others that have sued it.

The states that oppose Purdue's settlement terms previously dropped their objections to bonuses for the company's 683 other employees after it agreed to reduce some of them.

The company originally sought bonuses in 2020 worth an estimated $46 million to reward employees for individual and company performance, staying with Purdue, or in 10 cases for signing previously negotiated deals. The company has cut its earlier bonus request by $10 million.

Some incentive programs would pay workers an average of $50,000 or more. The 62 hourly employees at Purdue's generic subsidiary, Rhodes, stand to receive about $5,000 each under one bonus program.

The company also says the bonuses could be needed for workers who make between $100,000 and $200,000 a year to hire lawyers amid the company's legal battles.

Whether troubled companies should be allowed to pay bonuses to executives and other critical employees is a common topic debated during bankruptcy proceedings. In 2009, a judge ruled that Lehman Brothers, the investment bank, could pay 230 traders bonuses totaling $50 million to keep working through that company’s bankruptcy. This year, a judge approved paying rank-and-file workers for Pacific Gas & Electric Corp. $235 million in bonuses but nixed millions in extra pay for top executives.

In Purdue's case, the Stamford, Connecticut-based company says two dozen employees have resigned since it filed for bankruptcy in September and that replacements are hard to find.

“Purdue continues to be a difficult place to work, and retaining and motivating Employees continues to be a challenge,” chief financial officer Lon Lowne said in a court filing this week. “In recent weeks, Employees have received an unprecedented barrage of calls from recruiters.”

States are drawing the line at a big bonus for the CEO, even after the company cut Landau out of one bonus program and said it would cap his bonus in the other at half of what he had been in line to receive. Purdue also has said it would split Landau's bonus into two installments rather than deliver it as a lump sum next year — and would reserve the right to take some of it back if he leaves before Sept. 1, 2020. Landau's base salary is $2.6 million.

Landau, a Purdue employee since 1999 who rose to the top job in 2017, is named as a defendant in lawsuits filed by Colorado, Massachusetts, five local governments and more than 100 hospitals.

In their lawsuits, the two states allege that Landau blamed the dangers of opioids on patients rather than the drugs and that he knowingly put patients at risk by having his sales team encourage more prescribing of the drug without disclosing the addiction risks.

They say he pushed opioids for elderly patients and those who had never taken them before without disclosing their risks, falsely claimed that a version of OxyContin that was reformulated to make it harder for abusers to break down was safe, and pushed doctors to prescribe opioids for a longer period of time.

Purdue has denied the claims against it and Landau has asked courts to dismiss complaints against him. In a filing in Massachusetts, he said that he did not oversee opioid sales or marketing in two executive jobs he held before becoming CEO. And he said that after he became CEO, he did not have direct day-to-day sales or marketing efforts — and that he ordered his company to stop marketing opioids to prescribers entirely after about eight months on the job.

Two of his lawyers and a company spokesman did not immediately return calls Wednesday morning seeking comment.

It's unclear whether bankruptcy Judge Robert Drain will make a determination on the bonuses or issue a decision later. He already has ruled that Purdue can make many payments to utilities, law firms and employees’ paychecks.