Fed Chair Jerome Powell noted that unemployment is at a half-century low and inflation is running close to the Fed's 2% target.

WASHINGTON (AP) — Federal Reserve Chairman Jerome Powell said Friday that the U.S. economy is facing some risks at the moment, but overall it is in a "good place" and the Fed's main job is to "keep it there as long as possible."

Powell noted that unemployment is at a half-century low and inflation is running close to the Fed's 2% target.

While Fed officials believe they have the correct strategy and tools to extend the current record-long expansion, it is important to examine whether any changes could improve the Fed's handling of the economy, Powell said.

In his brief remarks, Powell gave no hint on whether the Fed will cut interest rates for a third time this year when it meets later this month. Many investors are hoping for another quarter-point rate cut at the October meeting.

Among the changes the Fed has been considering at a series of town hall meeting this year is a modification of its current inflation target. The central bank seeks to manage interest-rate policies to achieve annual price increases of 2%.

However, hasn't hit that target in years. Some economists have been arguing for the Fed to use a broader band for inflation that would tolerate higher inflation for a time to compensate for periods when inflation is running below target.

In his remarks Friday, Powell said low inflation can be good, but when inflation and interest rates are too low, "the Fed and other central banks have less room to cut rates to support the economy during downturns."

Powell said that modifying the Fed's current inflation target could help keep inflation expectations among consumers, businesses and investors from slipping too low "as they appear to have done in several advanced economies."

Japan has been struggling with chronically low inflation for decades, and Europe now faces similar issues.

Powell said the central bank's main policy committee has been discussing its finding from the events since July and plans to continue those discussions at the last two meetings of this year in October and December.

He said the goal was to issue a report with conclusions during the first half of next year. 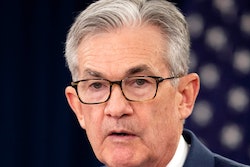