The CEO is out as well.

Matthew Perrone & Michelle Chapman
In this Dec. 20, 2018, file photo Juul products are displayed at a smoke shop in New York. Philip Morris and Altria have ended merger talks and JUUL’s CEO is stepping down from the top post as criticism over vaping continues to intensify. The companies confirmed last month that they were in discussions, more than a decade after splitting itself into two companies.
AP Photo/Seth Wenig, File

Juul Labs is halting all U.S. advertising of its e-cigarettes and replacing its CEO amid a nationwide backlash against vaping.

The largest e-cigarette maker also said Wednesday it won't fight a sweeping ban on flavors proposed by the Trump administration to reverse a surge in underage vaping.

Juul's CEO will be replaced by a senior executive from Altria, the maker of Marlboro cigarettes. Altria took a 35% stake in Juul in December at a cost of $13 billion.

The shake-up comes amid growing public furor over vaping that has triggered calls for tighter restrictions at the federal and state levels. Massachusetts said Tuesday it will ban all vaping products for four months, the first such step in the country.

E-cigarettes have been largely unregulated since first arriving in the U.S. in 2007. After multiple delays, the Food and Drug Administration has set a deadline of next May for manufacturers to submit their products for review.

The makers of e-cigarettes are now fighting to survive as they face two public health debacles linked to vaping: a mysterious lung illness and rising use of e-cigarettes by teenagers.

Juul's new chief, K.C. Crosthwaite, in a statement, said Juul has long focused on providing adult smokers with alternatives, but recognized that there's "unacceptable levels of youth usage and eroding public confidence in our industry."

Health experts generally consider e-cigarettes less harmful than traditional cigarettes because they don't contain all the cancer-causing byproducts of burning tobacco. But there's virtually no long-term research on the health effects of the aerosol produced by vaping. E-cigarettes generally heat a liquid with nicotine to create a vapor.

Public health officials are investigating hundreds of recent cases of the breathing ailment. Most of the illnesses have involved vaping THC from marijuana, but officials have not yet implicated any common product or ingredient.

Meanwhile, underage vaping has reached epidemic levels, according to top government health officials. In a government survey, more than 1 in 4 high school students reported using e-cigarettes in the previous month. Federal law bans sales to those under 18.

"Juul's announcement today is aimed at repairing its image and protecting its profits, not at solving this crisis," said Matthew Myers, president of the Campaign for Tobacco-Free Kids. "Policymakers must stand up to Juul and protect our kids by banning flavored e-cigarettes."

Also on Wednesday, tobacco giants Altria and Philip Morris International said they were calling off merger talks a month after first floating a deal that would have created the world's largest tobacco company. Altria's stake in Juul was considered a key factor in the deal. And a combination with Philip Morris would have given Juul access to the tobacco company's global network and resources.

Juul's e-cigarettes first went on sale in 2015 and the company quickly propelled itself to the top of the market with a combination of high-nicotine pods, dessert and fruit flavors and viral marketing. Today, the San Francisco company controls roughly 70% of the U.S. e-cigarette market.

In the last year, Juul tried to reposition itself as a brand for middle-age smokers looking to wean themselves off cigarettes. But the FDA warned the company this month that its product hasn't yet been approved to help smokers quit.

Juul has tried to head off a crackdown with a series of voluntary steps, including halting retail sales of several flavors and shutting down its social media presence. But political pressure has only increased.

The company now faces multiple investigations from Congress, several federal agencies — including the FDA — and state attorneys general. Earlier this month, President Donald Trump said that the federal government will act to ban thousands of flavors used in e-cigarettes because they appeal to underage users.

"We must strive to work with regulators, policymakers and other stakeholders, and earn the trust of the societies in which we operate," he said in a statement. "That includes inviting an open dialogue, listening to others and being responsive to their concerns."

Altria and Philip Morris said last month that they were in discussions to become a single company, more than a decade after splitting into two as lawsuits mounted.

Altria has exclusively sold Marlboro cigarettes and other tobacco brands in the U.S., while Philip Morris has handled international sales.

Philip Morris International Inc. CEO André Calantzopoulos said Wednesday that the companies will instead focus on launching IQOS in the U.S. IQOS is a heat-not-burn cigarette alternative made by Philip Morris. Crosthwaite headed the development of IQOS. 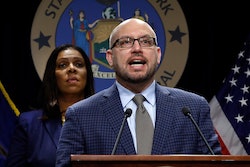 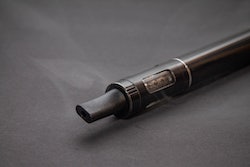 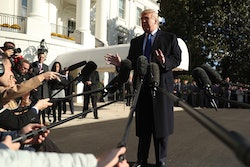