It makes it harder for companies to classify workers as independent contractors and would impact a wide array of industries. 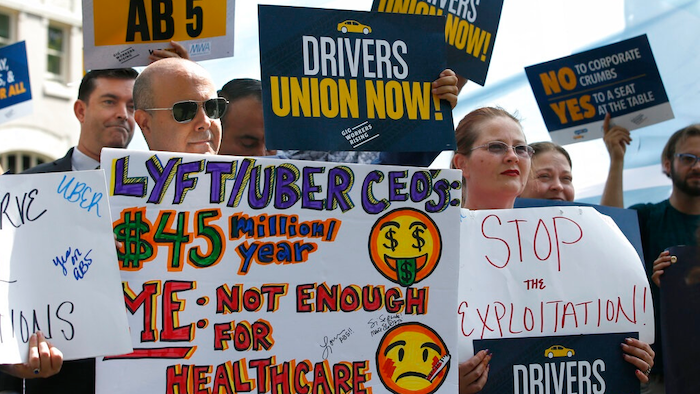 Dozens of supporters of a measure to limit when companies can label workers as independent contractors rally at the Capitol in Sacramento, Calif., Wednesday, Aug. 28, 2019. If approved by the legislature and signed by Gov. Gavin Newsom, AB5, by Assemblywoman Lorena Gonzalez, D-San Diego, would require companies like Uber and Lyft to treat their drivers like employees.
AP Photo/Rich Pedroncelli

SACRAMENTO, Calif. (AP) — The California Senate has passed a bill that would give new wage and benefit protections to workers at so-called gig economy companies like Uber and Lyft.

The 29-11 vote late Tuesday sends the bill back to the state Assembly for final approval over strident Republican opposition. Democratic Gov. Gavin Newsom has said he supports it.

The proposal has drawn staunch opposition from on-demand delivery and ridesharing companies while winning support from many of the Democratic presidential contenders.

It puts into law a California Supreme Court decision making it harder for companies to classify workers as independent contractors. The bill would make those companies classify their workers as employees instead.

While its impact on gig economy companies has drawn most of the attention, it would affect a wide array of industries.