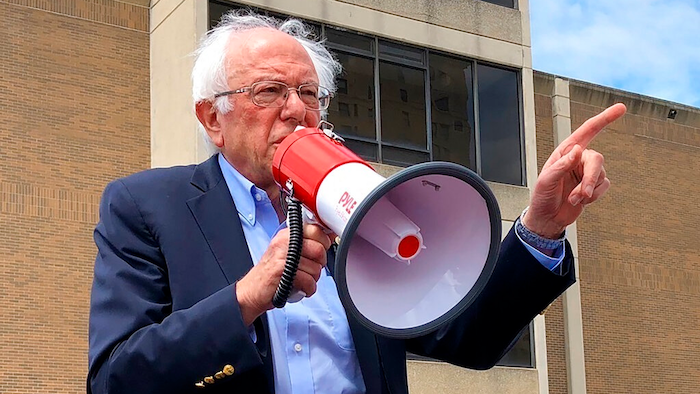 Democratic presidential candidate Bernie Sanders speaks to striking telecommunications workers on Sunday, Aug. 25, 2019, in Louisville, Ky. Sanders says it’s possible to be a friend of coal miners and a believer in climate change and the need for cleaner energy sources to combat it.
AP Photo/Bruce Schreiner

LOUISVILLE, Ky. (AP) — Democratic presidential candidate Bernie Sanders has told voters in coal-producing Kentucky that it's possible to be a friend of coal miners and a believer in climate change and the need for cleaner energy sources to combat it.

In blunt terms rarely heard in Kentucky's political circles, the Vermont senator said Sunday on a stop in Kentucky that bold action is needed to confront the dangers from climate change. That course of action should include turning away from fossil fuels to curb greenhouse gas emissions blamed for global warming, he said.

Sanders said he recognizes that many Kentuckians have long relied on coal mining to support their families.

"So let me be as clear as I can be, coal miners ... are not my enemy," the senator said. "Workers in the fossil fuel industry are not my enemy. Climate change is our enemy."

Sanders vowed to help communities tied to coal and other fossil fuel industries in the transition toward clean energy production.

The development of wind, solar and other sustainable energy sources will create jobs, as will modernizing the nation's electricity grid, he said. He pledged support for expansion of high-speed broadband service in rural regions.

"Here is my promise as we transition away from fossil fuel: we will not abandon communities that have relied on fossil fuel jobs," he said. "We will rebuild those communities."

Republican Donald Trump's enthusiasm for coal helped make that region one of his most fervent bases of support as Trump racked up big wins in West Virginia, Kentucky and other states in 2016 en route to winning the presidency.

"Future generations deserve a planet that is healthy and is habitable, and we have the moral responsibility to make sure that they have that kind of planet," Sanders said.