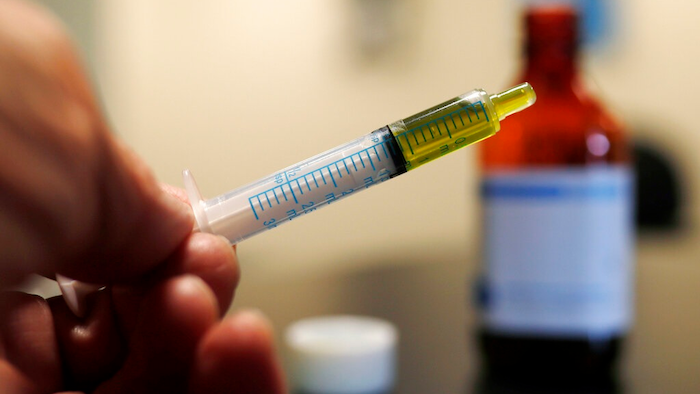 In this Nov. 6, 2017 file photo, a syringe with a dose of CBD oil is shown in a research laboratory in Fort Collins, Colo. CBD is a compound found in marijuana but doesn’t cause a high. On Tuesday, July 23, 2019, the Food and Drug Administration announced it has warned Curaleaf Inc., of Wakefield, Mass., for illegally selling unapproved CBD products. The agency says Curaleaf’s claims could lead people to delay medical care for serious conditions like cancer.
AP Photo/David Zalubowski, File

"Consumers should beware of purchasing or using any such products," said Acting FDA Commissioner Ned Sharpless in a statement.

The FDA has issued similar warning letters to smaller businesses, but this is the first since the agency began studying how it regulates CBD. The agency plans to report in the fall on its regulatory approach after holding a public hearing and receiving nearly 4,500 comments.

The agency is exploring "potential regulatory pathways" for some CBD products to be lawfully marketed, Sharpless said.

Curaleaf, which operates in 12 states, said it will work with the FDA to resolve the issues mentioned in the warning letter . The company's shares fell more than 7% on the news, and some other cannabis stocks lost ground.

The company "is fully committed to complying with FDA requirements for all of the products that it markets," Curaleaf said in a statement.

CVS Health, which started carrying CBD skin products in some states this year, plans to remove Curaleaf from its shelves following the FDA's warning, said CVS spokesman Mike DeAngelis in an email. The drugstore chain has been selling Curaleaf CBD lotion and skin patches. CVS does not sell any CBD supplements or foods, DeAngelis said.

CBD is a compound found in marijuana that doesn't cause a high. Its skyrocketing popularity has attracted mainstream retailers despite little evidence of its health claims.

Curaleaf said all its CBD products come from hemp, a version of the cannabis plant that is low in THC, the part of cannabis that gives pot its high.

The CBD industry hoped the legislation would allow broad sales of the ingredient.

But the FDA still regulates pharmaceutical products. Since CBD is the active ingredient of GW Pharmaceuticals' Epidiolex, approved by the FDA last year, the agency has said it can't be added to food or marketed to treat health conditions without going through the FDA's established processes.