EPA Restores Broad Use of Pesticide Opposed by Beekeepers

Sorghum growers in particular had pressed senior officials at the agency for a return to broad use of sulfoxaflor. 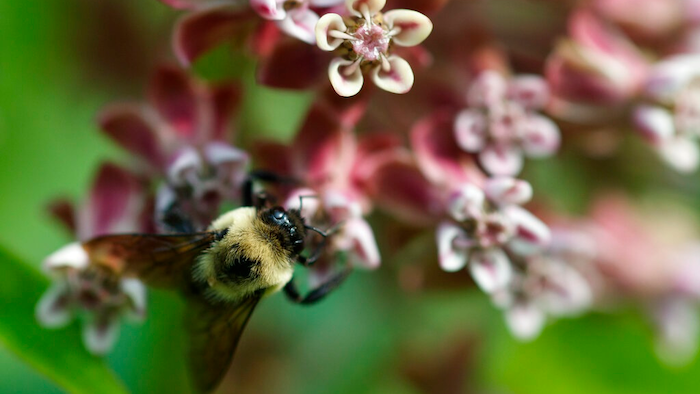 In this June 5, 2019, photo, a bee pollinates a milkweed flower at the USGS Patuxent Wildlife Research Center in Laurel, Md. The Environmental Protection Agency will allow farmers to resume broad use of a pesticide over objections from beekeepers.
AP Photo/Carolyn Kaster

WASHINGTON (AP) — The Environmental Protection Agency will allow farmers to resume broad use of a pesticide over objections from beekeepers, citing private chemical industry studies that the agency says show the product does only lower-level harm to bees and wildlife.

Friday's EPA announcement — coming after the agriculture industry accused the agency of unduly favoring honeybees — makes sulfoxaflor the latest bug- and weed-killer allowed by the Trump administration despite lawsuits alleging environmental or human harm. The pesticide is made by Corteva Agriscience, a spinoff created last month out of the DowDuPont merger and restructuring.

Honeybees pollinate billions of dollars of food crops annually in the United States, but agriculture and other land uses that cut into their supply of pollen, as well as pesticides, parasites and other threats, have them on a sharp decline. The University of Maryland said U.S. beekeepers lost 38 percent of their bee colonies last winter alone, the highest one-winter loss in the 13-year history of their survey.

Emails and other records obtained from the EPA through Freedom of Information Act litigation by the Sierra Club, and provided to The Associated Press, show sorghum growers in particular had pressed senior officials at the agency for a return to broad use of sulfoxaflor.

Sorghum growers regard honeybees as just another "non-native livestock" in the United States, lobbyist Joe Bischoff said in one 2017 email to agency officials, and by cutting threats to the bees, "EPA has chosen that form of agriculture over all others."

A federal appeals court had ordered the EPA to withdraw approval for sulfoxaflor in 2015, ruling in a lawsuit brought by U.S. beekeeping groups that not enough was known about what it did to bees.

EPA Assistant Administrator Alexandra Dapolito Dunn said Friday that new industry studies that have not been made public show a low level of harm to bees and other creatures beyond the targeted crop pests.

Dunn said EPA's newly reset rules for use of sulfoxaflor, such as generally prohibiting spraying of fruit and nut-bearing plants in bloom, when pollinators would be attracted to the flowers, would limit harm to bees. She called it "an important and highly effective tool for growers."

Michele Colopy, program director of the Pollinator Stewardship Council, one of the beekeeping groups that had successfully sued to block sulfoxaflor, said the EPA limits weren't enough to protect bees and other beneficial bugs whose numbers are declining.

"We understand farmers want to have every tool in their toolbox," when it comes to curbing insects that damage crops. "But the ... pesticides are just decimating beneficial insects," Colopy said.

An environmental group charged the EPA with sidestepping the usual public review in reapproving broader use of the pesticide.

"The Trump EPA's reckless approval... without any public process is a terrible blow to imperiled pollinators," said Lori Ann Burd, director of the Center for Biological Diversity's environmental health program.

Separately, the U.S. Department of Agriculture announced without fanfare on July 1 that it would stop collecting quarterly data on honeybee colonies, citing budget restrictions. Beekeepers and others used the data to track losses and growth in U.S. honeybee colonies.

Other Trump administration decisions have upheld market use of the weed-killing glyphosate, which is now the target of thousands of consumer lawsuits over alleged harm to people exposed to it, and shelved an Obama-era decision to ban the pesticide chlorpyrifos as a threat to human health.