The measure gained House approval but has little chance of surviving in the Senate. 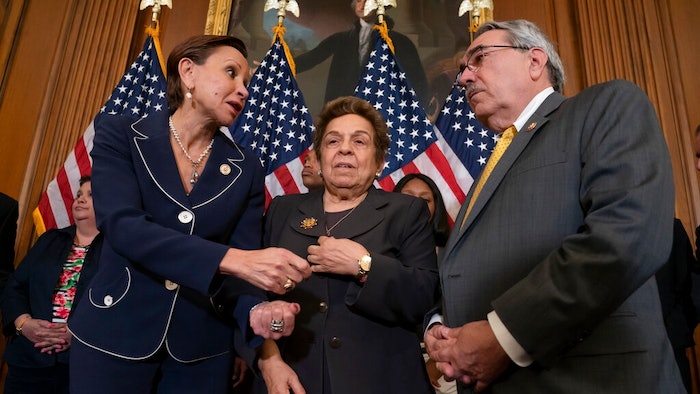 From left, Rep. Nydia Velazquez, D-N.Y., Rep. Donna Shalala, D-Fla., and Rep. G. K. Butterfield, D-N.C., speak as they attend a Democratic event ahead of a House floor vote on the Health Care and Prescription Drug Package, at the Capitol in Washington, Wednesday, May 15, 2019.
AP Photo/J. Scott Applewhite

WASHINGTON (AP) — Democrats pushed legislation buttressing the 2010 health care law and curbing prescription drug prices through the House Thursday, advancing a bill that has no chance of surviving in the Senate or getting President Donald Trump's signature and seemed engineered with next year's elections in mind.

The measure forced Republicans into the uncomfortable political position of casting a single vote on legislation that contained popular drug pricing restraints they support, plus language strengthening President Barack Obama's health care statute that they oppose.

In the end, all but five voting Republicans opposed the overall package as the measure passed by a mostly party-line 234-183.

Much of the bill focused on reversing steps — largely backed by GOP lawmakers — that Trump has taken to weaken Obama's law , a statute he has vowed to repeal ever since his presidential campaign. The measure would restore money Trump has cut to publicize the law and help patients enroll for its benefits, block Trump's expansion of the availability of low-cost, low-coverage plans and help states set up their own online marketplaces where policies are sold.

Democrats view Obama's law as one of their greatest recent achievements, and see efforts to strengthen it as perhaps their most effective issue going into next year's presidential and congressional elections. They said Trump's moves were part of his effort to erode the law, which has expanded coverage by about 20 million people.

"Here is the Democratic response," said Rep. Hakeem Jeffries of New York, a member of the House Democratic leadership. "Keep your hands off of the health care of everyday Americans."

Democrats said that by giving states more leeway to make low-price plans with skimpy coverage available, Trump was enabling the sale of policies that don't cover people with pre-existing conditions. Democrats say a major factor in their takeover of the House in last November's elections was their hammering of Republicans for making such patients vulnerable to losing coverage.

In remarks she aimed at Senate Majority Leader Mitch McConnell, R-Ky., who has vowed to be "the grim reaper" for Democratic initiatives in his GOP-controlled chamber, House Speaker Nancy Pelosi, D-Calif., warned, "The support for this legislation, these bills, is alive and well among the American people, and he will be hearing from them."

Republicans defended Trump's moves, saying government funds that go to outside organizations to help them sign up people for coverage often produce scant results. They also Trump's effort to increase the availability of low-price policies with bare bones coverage made sense because such policies are all some people can get.

"Is it what we want people to have? I would tell you no, it's not," said Rep. Austin Scott, R-Ga. "But it's sure better than nothing."

GOP lawmakers also accused Democrats of purposely packaging the legislation to force Republicans to vote "no," including against its constraints on rising prescription drug prices. The growing costs of medicine are a major public concern, and Republicans said Democrats were undermining steps to make drugs more affordable by putting them in a bill they knew was going nowhere.

"It is the opposite of what elected officials are supposed to do," said House Minority Leader Kevin McCarthy, R-Calif. "They're supposed to fill in the potholes, not dig them."

Democrats said they wrapped the bills together so that when combined, savings from some provisions would pay for increased costs from other sections. The government would save money by paying less for generic drugs, but spend more to find consumers to purchase policies.

The White House distributed a statement this week warning that Trump would veto the legislation if it reaches his desk. Since the measure won't likely see the light of day in the Senate, Trump won't have to bother, but the battle gave him a chance to state his views.

The letter said that while the legislation includes steps to control drug prices that Trump backs, it also has provisions "that would restrict access to health care coverage for many Americans and impede efforts to reduce inefficient spending on health care programs."