In 2011, flooding along the Yellowstone River scoured the river bottom and exposed the buried pipeline, causing it to break and release crude. 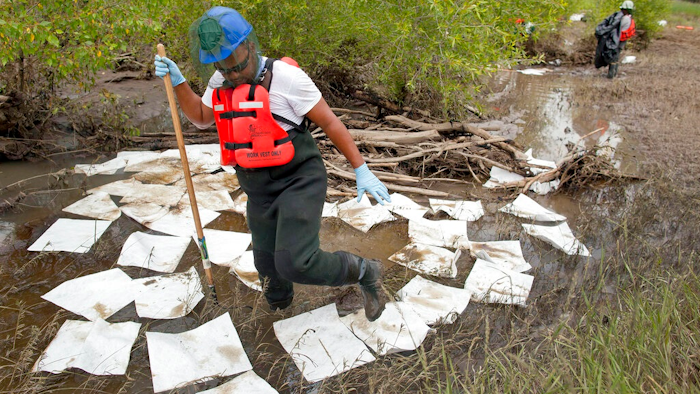 This July 11, 2011, file photo, shows an oil spill crew worker for Oil Mop Emergency Response stepping out of a ring of absorbent pads along a flood plain of the Yellowstone River where oil was found collected, near Laurel, Mont. Exxon Mobil Corp. has agreed to pay a $1.05 million penalty to settle alleged federal water pollution violations resulting from a 2011 oil pipeline spill into Montana's Yellowstone River.
AP Photo/Julie Jacobson, File

Approval of the agreement by U.S. District Judge Susan Watters would resolve the last outstanding federal enforcement case against the oil giant stemming from the 2011 accident that spilled 63,000 gallons (238,474 liters) of crude.

Terms of the settlement were detailed in a consent decree filed in federal court in Billings. It's subject to a 30-day public comment period.

The spill near the town of Laurel, about 15 miles (24 kilometers) west of Billings, came after flooding along the Yellowstone scoured the river bottom and exposed the buried pipeline, causing it to break and release crude directly into the waterway.

The accident occurred downstream of Yellowstone National Park along a stretch of river popular among fishers, boaters and other recreational users. About 140 people were temporarily evacuated because of health and safety concerns.

The latest penalty stems from violations of the Clean Water Act. Oil swept downstream by the raging river entered tributaries and nearby wetlands and fouled more than 14 square miles (36 square kilometers) of riverfront, according to court documents.

Exxon spokesman Jeremy Eikenberry said the settlement "provides for an acceptable outcome that avoids protracted litigation between the parties."

The company on Friday reported earnings of $2.35 billion during the first quarter of 2019, down by roughly half from the same period a year earlier.

The 12-inch (30-centimeter) Silvertip pipeline had been installed just a few feet beneath the riverbed, sparking a national discussion over the adequacy of safety rules for thousands of pipelines crossing beneath waterways.

In the years since the Yellowstone spill and at the urging of safety regulators, companies including Exxon have re-installed some lines at greater depths to reduce the risk of accidents. There still are no federal regulatory mandates for lines to be deeply buried.

In 2015, another shallow pipeline broke and spilled 30,000 gallons (113,559 liters) farther downstream along the Yellowstone near the city of Glendive.