The agreement would raise alcohol limits to four percent, which is still lower than most states but would allow beers like Bud Light and Corona to be sold.

Lindsay Whitehurst
In this file photo, Republican Sen. Jerry Stevenson, looks on during a news conference, in Salt Lake City. Utah lawmakers have reached a compromise deal to increase the amount of alcohol available in beer. Jerry Stevenson said Wednesday, March 13, 2019, the agreement would raise alcohol limits to 4 percent, which is still relatively low but would allow for most production-line beers to be sold in grocery and convenience stores.
AP Photo/Rick Bowmer

SALT LAKE CITY (AP) — Alcohol limits for beer at Utah grocery stores inched closer to the rest of the country Wednesday under a legislative compromise in the state where the predominant faith teaches abstinence from alcohol. The agreement would raise alcohol limits to four percent starting in November, a level that's still lower than almost all other states but would allow beers like Bud Light and Corona to be sold, Republican Sen. Jerry Stevenson said.

The agreement breaks a stalemate over a proposed larger increase that was supported by big retailers like Wal-Mart but opposed by The Church of Jesus Christ of Latter-day Saints, which counts most lawmakers as members. The four-percent-by-weight limit would allow most, but not all, regular-strength beers in private stores and on tap, said Kate Bradshaw, a lobbyist with the Responsible Beer Choice Coalition, a group of manufacturers, distributors and sellers.

"It's the biggest change in Utah alcohol history in 86 years, since prohibition ended," she said. A task force would also be assigned to study whether to raise the limits again. Higher-strength beer, wine and spirits are only available at state-owned liquor stores in Utah. The compromise is palatable for the church as well. Marty Stephens, director of government relations, said the faith still had concerns but considers the compromise an improvement and won't oppose it.

The deal cleared its biggest hurdle, the state House of Representatives, Wednesday night, and it is expected to fare well in the state Senate. Utah now limits beer to 3.2 percent alcohol at grocery and convenience stores, which stock weaker versions of popular beers. Large breweries have been discontinuing those products, though, because the market is shrinking as other states like Oklahoma, Colorado and Kansas abandon similar limits.

The emptier shelves are difficult for stores that depend on revenue from beer sales, Stevenson has said. He originally wanted to raise alcohol limits to 4.8 percent, but The Church of Jesus Christ of Latter-day Saints opposed the idea. The state Senate passed it anyway, but it stalled in the House amid concern about the potential side effects.

If passed, the deal would also avoid the possibility of a ballot initiative seeking the approval of higher alcohol limits from voters who have bucked state lawmakers on other hot-button issues like medical marijuana and Medicaid expansion. Utah also hosts an active microbrewery community, and many brewers had opposed the incremental 4.8 increase that they said would benefit big companies over locals.

The Utah Brewers Guild did not take a position on the compromise deal. 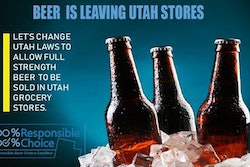