She said legalizing industrial hemp production could be a first step to eventually legalizing recreational marijuana. 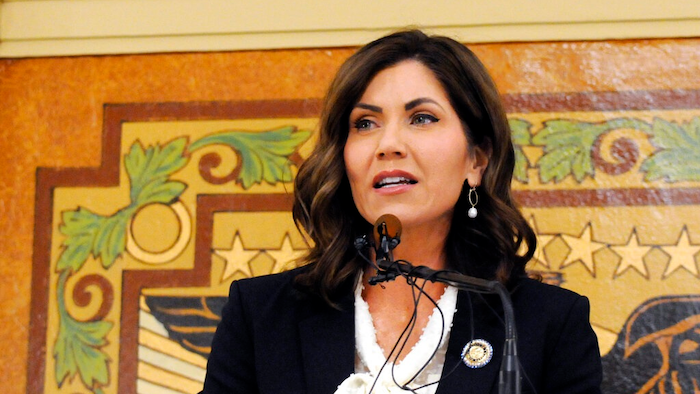 In this Jan. 8, 2019 file photo, South Dakota Gov. Kristi Noem gives her first State of the State address in Pierre, S.D. Noem says she's proposing legislation ahead of the Keystone XL oil pipeline's construction that would create a legal avenue to pursue out-of-state money that funds protests aimed at slowing construction. The Republican governor said Monday, March 4, 2019 that she wants to make sure Keystone XL and future pipelines are built safely and efficiently while shielding the state and counties from major law enforcement costs if there are riots.
AP Photo/James Nord, File

Noem had previously opposed legalizing hemp this year but had not threatened a veto. She raised a host of objections to the bill as it was being drafted.

"There is no question in my mind that normalizing hemp, like legalizing medical marijuana, is part of a larger strategy to undermine enforcement of the drug laws and make legalized marijuana inevitable," Noem said in a statement along with her veto.

Earlier Monday, the House voted overwhelmingly for the bill and sent it to her. But a 21-14 vote in the Senate fell short of the two-thirds support it would need to override her veto.

At least 41 states have enacted hemp growing and production programs, according to the National Conference of State Legislatures.

The bill's main sponsor, Democratic Rep. Oren Lesmeister, has said it would allow South Dakota farmers and ranchers to keep up with the demand and the expansion of the hemp industry.

Noem said she was worried that drug detection dogs flag hemp like marijuana and that the plants look alike. Her administration has said allowing hemp cultivation would come with a multi-million dollar price tag and lead to another push to legalize marijuana in South Dakota.

"Tell her I hope she vetoes it, because that would be good for Wyoming," he said.

Lesmeister said the Senate added "close to 90 percent" of a suggested amendment from the governor's office. The alterations include broader background check requirements, giving more rulemaking authority to state agencies and restricting who could transport industrial hemp. The changes also require hemp to be grown outdoors.

How the FDA Will Deal With Hemp