They also accused the Securities and Exchange Commission of censorship and of violating Musk's First Amendment rights. 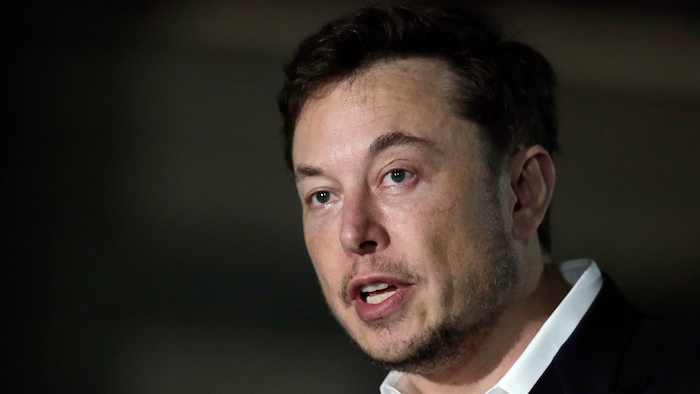 DETROIT (AP) — Tesla CEO Elon Musk should not be found in contempt of court because he has complied with the terms of a securities fraud settlement, his attorneys wrote in documents filed Monday night with the U.S. District Court in Manhattan.

Musk's lawyers wrote that a February 19 tweet merely restated prior disclosures on electric car production volumes. They wrote that the tweet after the markets closed did not reveal material information, nor did it alter the mix of data available to investors. The lawyers also accused the Securities and Exchange Commission of censorship and of violating Musk's First Amendment rights.

U.S. District Judge Alison Nathan ordered Musk to respond to a motion for contempt filed by the SEC. The agency alleges the Feb. 19 tweet was inaccurate and violated a requirement for tweets that could influence Tesla's stock price to be approved by a company lawyer.

Musk's 13-word tweet said that Tesla would produce around 500,000 vehicles this year, but it wasn't approved by the company's "disclosure counsel," the SEC said in court records. The lawyer quickly realized it and summoned Musk to the company's Fremont, California, factory to help write a correction four hours later. The company would make vehicles at a rate of 500,000 per year, but it wouldn't produce a half-million in 2019.

The response by Musk attorney and Enron prosecutor John C. Hueston of Newport Beach, California, also said that the settlement allows Musk "reasonable discretion" to determine if his communications would require the lawyer's approval. In the case of the February 19 tweet, Musk determined that it did not.

Musk, the document stated, has diligently complied with the court-approved settlement, dramatically reducing his activity on Twitter. Even though in his view there was no need to do it, Musk posted a clarification to the tweet after speaking with the lawyer, the paperwork said.

The SEC's interpretation of the order also raises serious First Amendment issues "effectively requiring Musk to seek pre-approval of any tweet that relates to Tesla," according to the documents. The lawyers also wrote that the SEC is seeking enforcement authority that is far broader and less clearly defined than it was granted by Congress. The contempt motion, which came after Musk criticized the agency in an interview on CBS' 60 Minutes, shows "concerning and unprecedented overreach on the part of the SEC," the lawyers wrote.

Musk said during the interview that he didn't respect the SEC, but he would obey the settlement out of respect for the justice system. The SEC cited the interview in its contempt motion, which "smacks of retaliation and censorship," Musk's lawyers wrote. Messages were left after business hours Monday seeking comment from the SEC.

It was unclear Monday night when Judge Nathan would rule on the SEC's contempt motion, which was filed on February 25.

The October settlement stemmed from tweets by Musk in August about having the money to take the company private at $420 per share. The funding was far from secured. The settlement specified governance changes, including Musk's ouster as board chairman, as well approval of Musk's tweets. Musk and Tesla each paid $20-million fines for the August tweets, which Musk made from his car on the way to the airport.

At 7:15 p.m. February 19, Musk tweeted "Tesla made 0 cars in 2011, but will make around 500k in 2019." That turned out to be in error, and it wasn't consistent with prior company disclosures. In its fourth-quarter earnings release Tesla said it was targeting annualized Model 3 output "in excess of 500,000 units" sometime between the fourth quarter of this year and second quarter of 2020.

Musk did say on a conference call that day that the company this year would make maybe 350,000 to 500,000 Model 3s, its lowest-priced car. Legal experts say it's unlikely that Musk will be punished severely, but the commission wants to get on the record that Musk violated the terms, to prepare for any future violations.

The tweet was posted and corrected after U.S. markets had closed, but experts say regulators don't care much about that because stocks are traded nearly around the clock. Tesla's stock rose by just $1.10, or less than one percent, the next day.

The discord comes just months before the first ever European climate law is adopted.
Oct 15th, 2020
Follow Us
Most Recent