Protecting U.S. drinking water from toxic chemicals could cost in the tens of billions of dollars. 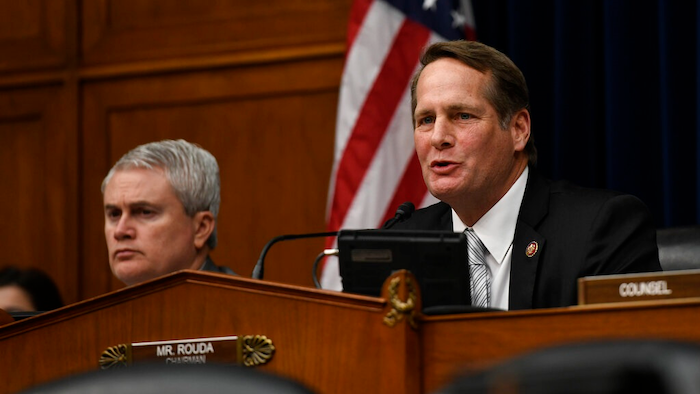 WASHINGTON (AP) — Cleaning up and protecting U.S. drinking water from a class of toxic chemicals used in many household items could cost in the tens of billions of dollars nationally, including $2 billion for the Department of Defense alone, witnesses testified Wednesday before a House panel urging the federal government to move more quickly on the cleanup.

Rep. Harley Rouda, the California Democrat chairing the House Oversight and Reform environment subcommittee, told reporters after the hearing "it's clear" the high costs were slowing any federal efforts to regulate and clean up the toxic chemicals, which are found in a range of goods, including nonstick pans, stain-resistant clothing, dental floss and food containers. They also are in firefighting foam used by the military to battle jet-fuel fires.

The compounds, called perfluoroalkyl and polyfluoroalkyl substances, or PFAS, have been used for decades. Water sampling shows the contaminant — also called the "forever chemicals" because they will take thousands of years to break down —has seeped into many public water systems in the United States and globally, including around military bases and industries.

Environmental Protection Agency chief Andrew Wheeler told reporters Tuesday that the agency was moving toward establishing federal limits for some kinds of the contaminant in drinking water. States and local communities say they need a mandatory EPA limit to start full-scale cleanup and protections against the compounds.

"There's no indication of when the process might actually be complete," Rouda told EPA and Defense Department officials testifying before the panel. In the meantime, military officials "are passing the buck to the EPA" rather than conducting a national cleanup of bases that have high levels of PFAS contamination, he said.

Democratic Rep. Dan Kildee of Michigan said veterans and families are increasingly fearful of PFAS contamination around bases. "The Defense Department in particular has so far failed to act with the required urgency to address this growing problem," he said.

The Trump administration has been under increasing pressure to start regulating the toxic class of compounds since last year, when a draft federal toxicology report found some kinds of the widely used chemicals were harmful at levels much lower than the federal government's current advisory level. The federal Agency for Toxic Substances and Disease Registry cited studies linking PFAS contamination to liver problems, low birth weight, some cancers and other health issues.

Rep. Brian Fitzpatrick, a Pennsylvania Republican and co-chairman of a congressional PFAS task force, called the forever compound "one of the most widespread public health crises" that the U.S. faces.

But Fitzpatrick cautioned against setting any PFAS limits too low, saying it would cost tens of billions of dollars to bring water systems into compliance.

David Ross, assistant administrator of the EPA's water office, defended the agency's decision to continue researching the compounds ahead of any formal regulatory moves.

"The science to fully understand these chemicals ... is not yet as robust as it needs to be," Ross said. He said resolving PFAS contamination was a national priority for the agency.

Communities and states say the EPA has done little concrete to start tackling the problem. In a tweet Wednesday, Mayor Rob Allen of Hoosick Falls, New York, where industrial releases are blamed for dangerously high PFAS levels in water, evoked the compound's nickname in saying "it will take 'forever' for EPA to act on its responsibility to regulate them."

The Defense Department has identified 401 military sites where PFAS was used, and found 24 U.S. military drinking-water systems around the world with PFAS levels above the current U.S. advisory level, Maureen Sullivan, the deputy assistant secretary of defense, told lawmakers.

Cleaning up bases contaminated by two of the best-studied versions of PFAS would cost about $2 billion, she said.

Kildee, whose state of Michigan has been one of the most active in testing for PFAS and tackling contamination, said the Pentagon had yet to request the money for that cleanup.

Some states and local communities hosting military bases accuse the military of using the lack of any mandatory federal limit for PFAS in drinking water as a reason to deny Pentagon responsibility for cleanup.

New Mexico sued the Air Force on Tuesday over PFAS contamination around two bases in that state.

Sullivan said the Pentagon currently is discouraging the use of firefighting foam containing PFAS in training exercises on military bases. The Defense Department has yet to find a commercially available foam without PFAS that's effective enough in fighting aircraft fires, however, Sullivan said.