A group of black plaintiffs allege a seed company sold them faulty, low-yield seeds because of their race. 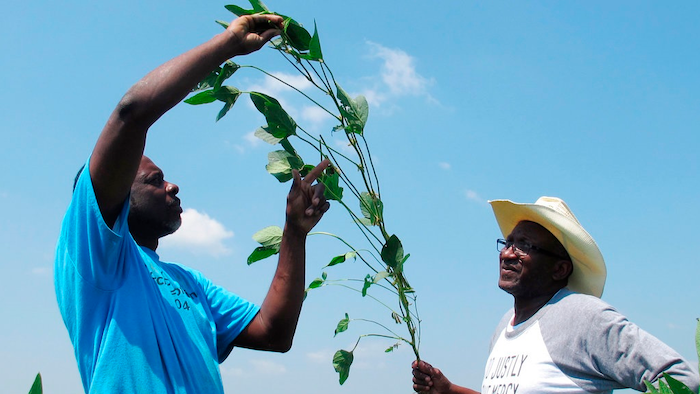 In this June 25, 2018, file photo, Tyrone Grayer, left, and David Allen Hall inspect a soybean plant at their farm in Parchman, Miss. A judge is ordering settlement talks in a lawsuit filed by black farmers from Mississippi and Tennessee including Hall and Grayer, who claim Stine Seed Co. sold them faulty soybean seeds because of their race.
AP Photo/Adrian Sainz, File

MEMPHIS, Tenn. (AP) — A federal judge ordered settlement talks Thursday in a lawsuit filed by black farmers from Mississippi and Tennessee who claim a company sold them faulty, low-yield soybean seeds because of their race.

During a court hearing in Memphis, U.S. District Judge John T. Fowlkes told the farmers and Stine Seed Co. to begin mediation in a lawsuit alleging the company conspired with a seed salesman to sell thousands of dollars' worth of defective seeds to the farmers because they are black. Fowlkes also questioned whether the farmers have enough proof of a conspiracy and facts that support claims of discrimination, or if they were just making "speculative comments" in their lawsuit.

The farmers allege the seeds were much less productive than expected and salesman Kevin Cooper misled them with claims of good yields from soybean plants grown in fertile Mississippi Delta fields. The suit filed in April alleges the good seeds the farmers thought they had bought from Stine were replaced by inferior seeds before delivery. The farmers claim they were given the bad seeds as part of a larger pattern of discrimination and "racial animus" against them.

Stine and Cooper have denied accusations of false advertisement, fraud, racketeering and discrimination, calling them baseless, irresponsible and inflammatory. They have filed motions to dismiss the lawsuit, arguing that it doesn't cite a single racist comment or instance where the black farmers were treated differently from white farmers.

"It seems to me that the parties need to sit down and talk about this," the judge said.

In March 2017, farmer Tyrone Grayer met Cooper at the Mid-South Farm and Gin Show in Memphis, the lawsuit states. Cooper said he had soybean seeds that were suitable for Mississippi's growing conditions. The farmers ordered 12,000 pounds of Stine seeds.

The farmers say they planted the seeds correctly and under optimal farming conditions in Sunflower and Quitman counties in May 2017. They soon observed that the plants were germinating slowly, did not stand uniformly, and were too short.

The farmers allege Cooper and another man, Greg Crigler, swapped out the good seeds for the bad ones at a warehouse in Sledge, Mississippi. The black farmers were given the inferior seeds, and white farmers got the good ones, the lawsuit claims.

Daniel Van Horn, an attorney for Crigler, has denied Crigler switched out the seeds. Van Horn said accusations of racism are bad, but "falsely accusing someone of racism is equally as bad."

And, Fowlkes asked the farmers' lawyers if they had any facts supporting their racism claims.

"How do we make the leap?" Fowlkes said.

One of the farmers' attorneys, J. Gerard Stranch, said that while he only joined the case late last year, he could file an amended complaint with more facts. The defense opposed that. Stranch did accuse Stine of engaging in a "continuous pattern of racketeering conspiracy."

Fowlkes set a March 15 mediation deadline. David Hall, one of the farmers, said he would rather go to trial than discuss a settlement.

"I'm not happy with it," Hall said of the mediation order.