Monsanto's lawyers said they will fight every lawsuit in the country alleging that the active ingredient in the world's most popular herbicide causes cancer. 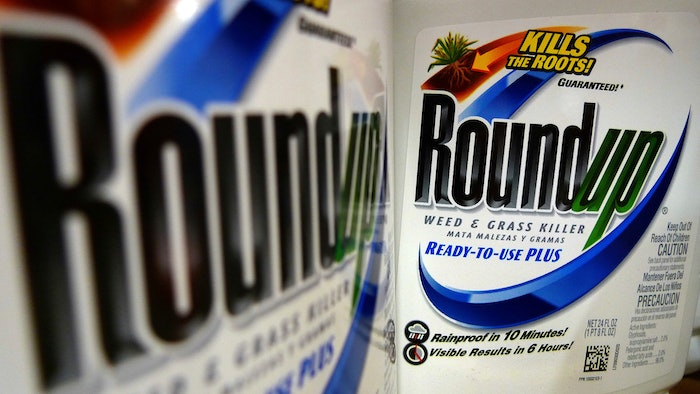 SAN FRANCISCO (AP) — With its stock dropping and more lawsuits expected, Monsanto vowed Tuesday to press on with a nationwide legal defense of its best-selling weed killer Roundup after a San Francisco judge upheld a verdict alleging it causes cancer.

Legal experts said the decision will have little value in courtrooms across the country where similar cases are pending, but it will likely lead to more lawsuits. Similar lawsuits doubled from 4,000 to 8,000 after a San Francisco jury awarded groundskeeper DeWayne Johnson $389 million in August.

Monsanto's lawyers said they will fight Johnson and every other lawsuit in the country alleging that the active ingredient in the world's most popular herbicide — glyphosate — causes cancer. Johnson's lawsuit was the first lawsuit to go to trial, and several more appear ready to start early next year.

Judge Suzanne Bolanos cut the jury's award for Johnson to $78 million on Monday but upheld its verdict against St. Louis-based Monsanto.

She reduced punitive damages from $250 million to $39 million in a brief decision that stood in sharp contrast to an earlier tentative ruling saying she doubted Johnson should receive any such award.

Bolanos previously said Johnson's attorneys failed to show Monsanto executives acted with malice, which is required for punitive damages. She didn't explain her change of mind. Several jurors wrote to the judge asking her to respect their verdict, but legal experts said that should not have influenced the judge.

Monsanto's lawyer said it would appeal the decision if Johnson accepts the award rather than asking for a new trial. He has until Dec. 7 to decide.

Monsanto argues that numerous scientific studies and the U.S. Environmental Protection Agency have found glyphosate to be safe.

"Because of this, we will continue to vigorously defend our glyphosate-based products," company spokesman Daniel Childs said.

Legal experts say the San Francisco decision will have no immediate legal effect on the other lawsuits, especially since they predict months — if not years — of appeals.

Levine said the company will not consider settling any lawsuit until enough trial court decisions pile up against it. "There just aren't enough data points to make a decision," he said.

"Clearly this topic isn't going to go away," UBS analyst Michael Leuchten wrote in a note to investors Tuesday.