The initiative would charge large carbon emitters fees on fossil fuels used or sold in the state or electricity generated within the state.

Phuong Le
This April 2, 2010 file photo shows a refinery owned by Andeavor, formerly Tesoro Corp. including a gas flare flame that is part of normal plant operations, in Anacortes, Wash. A campaign bankrolled by the oil industry has raised $20.46 million to defeat a carbon pollution fee on the ballot in Washington state aiming at tackling climate change.
AP Photo/Ted S. Warren, File

SEATTLE (AP) — A campaign bankrolled by the oil industry has raised $20.46 million to defeat a carbon pollution fee on the ballot in Washington state aiming at tackling climate change.

The money raised so far by the "No on 1631" campaign sponsored by the Western States Petroleum Association, an oil industry trade group, puts it near the top in fundraising efforts by a statewide initiative campaign in Washington, according to a review of state campaign finance data by The Associated Press.

The state record of $22.45 million was set in 2013 by the "No on 522" committee which successfully defeated a ballot measure requiring labels on food with genetically engineered ingredients.

If approved by voters Nov. 6, Initiative 1631 would make Washington the first state in the U.S. to impose a direct carbon fee or tax by voter initiative.

The initiative would charge large carbon emitters fees on fossil fuels used or sold in the state or electricity generated within the state. The fees would raise an estimated $2.3 billion in the first five years to fund a wide range of programs intended at cutting greenhouse gas emissions.

Oil companies have given the bulk of opposition money, with Phillips 66 the top donor at $7.2 million.

"This costly and flawed initiative would create damaging policies for our state and unfairly hurt Washington's families, small businesses and our economy," said Dennis Nuss, a spokesman with Phillips 66, which operates an oil refinery in Ferndale.

State Sen. Reuven Carlyle, a Seattle Democrat who sponsored a carbon tax bill in the most recent session, said big oil companies are trying to stop any momentum on carbon-pricing in the U.S.

California has a carbon-pricing program called cap-and-trade that limits emissions and allows polluters to buy and trade pollution credits. A coalition of Northeast states has a cap-and-trade program that applies to power plants.

Supporters of the measure have raised $6.1 million. The Nature Conservancy is the top donor giving $1 million in cash.

Proponents have run ads saying the initiative will hold polluters who have harmed people's health responsible and invests the money in clean energy, clean water and other projects.

Meanwhile, an opposition TV ad warns that the measure unfairly exempts many of the state's largest polluters, including the state's only coal-fired power plant, steel mills and aviation fuels — and claims that smaller businesses and consumers are left with the burden.

Initiative backers say the measure covers most of the polluters in the state. A state law passed in 2011 required the TransAlta coal-fired plant to shut down one of its boilers by 2020 and the other by 2025.

The measure comes two years after Washington voters rejected a carbon tax that would have been the first in the nation.

The escalating fees would start in 2020 at $15 per metric ton of carbon emissions, adding an estimated 14 cents to each gallon of gasoline sold. The fees increase $2 each year plus inflation and continues until the state meets goals to reduce greenhouse gas emissions. Then it would only adjust for inflation.

The initiative would also set up a 15-member public oversight board made up of governor appointees and state officials, to supervise the spending.

Critics say the board, with only one elected official, would have too much authority to spend billions of dollars on programs without accountability if emissions reduction targets are not met.

"This gives them huge latitude to do all sorts of things," said Todd Myers with the Washington Policy Center, a conservative think tank, adding that there would be no accountability if efforts fail.

Carlyle, the state senator, said the board's structure is in line with other state boards and commissions and the legislature ultimately has appropriations authority.

"The buck stops with the Legislature when it comes to spending authority," he said.

Dana Bieber, a spokeswoman for the No on 1631 campaign, said it doesn't matter to voters who funds initiatives.

"What they care about it how much the measure is going to cost them," she said. "This unfair energy tax is going to increase the cost of gas, electricity, heating fuel and natural gas."

Jeff Johnson, president of the Washington State Labor Council, said gas prices and electrical costs will go up initially but investments in clean energy will bring down the costs over time as the state transitions away from fossil fuels.

He said the board and three investment panels will go through a "rigorous process" to make sure projects will cut emissions.

"The whole goal is to reduce carbon emissions and clean up the air, the water and forests and have healthier outcomes for people," he said. 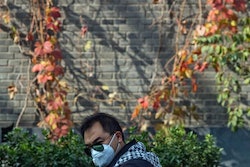