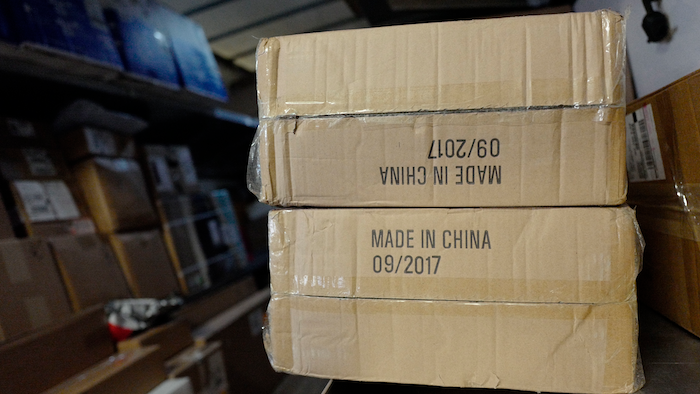 In this May 9, 2017, file photo packages labeled "Made in China" are loaded on a UPS truck for delivery in New York. Starting Monday, Sept. 17, 2018, the United States is to begin charging a 10 percent tax on thousands of Chinese imports — tires, windshield wipers, baseball gloves, bicycles, snakeskin pants, backpacks, trombone cases, refrigerators and wooden furniture, among others. The list runs 194 pages.
AP Photo/Mark Lennihan, File

Premier Li Keqiang's comments add to Beijing's effort to portray itself as a defender of global trade in the face of complaints by Washington and other trading partners that China violates its market-opening commitments.

Also Wednesday, a foreign ministry spokesman accused Washington of lacking sincerity after it proposed negotiations and then raised tariffs on $200 billion of Chinese goods. But he gave no indication whether Beijing would take part in talks.

China responded to President Donald Trump's tariff hike by imposing its own penalties Tuesday on $60 billion of American imports.

The two countries previously raised import taxes on $50 billion worth of each other's goods in the battle over U.S. complaints Beijing steals or pressures foreign companies to hand over technology.

American officials also object to Chinese plans for state-led development of champions in robotics and other fields. They say that violates Beijing's market-opening commitments and might erode U.S. industrial leadership.

Speaking at a business conference, Li made no direct mention of the tariff fight but called for disputes to be resolved through negotiation.

"It is essential that we uphold the basic principles of multilateralism and free trade," the premier said in a speech at the World Economic Forum in the eastern city of Tianjin.

Disputes "need to be worked out through consultation," said Li, the country's top economic official. "No unilateralism will offer a viable solution."

U.S. Commerce Secretary Wilbur Ross said Tuesday it was up to Beijing to decide when to talk.

"What the United States is doing shows no goodwill and no sincerity," Geng said at a daily briefing in Beijing.

Trump threatened to add an additional $267 billion in Chinese imports to the target list if Beijing retaliated for the latest U.S. taxes. That would raise the total affected by U.S. penalties to $517 billion, covering nearly everything China sells to the United States.

Foreign governments and security researchers say Beijing encourages and in some cases engages directly in theft of trade secrets. Chinese military officers have been indicted by U.S. prosecutors on charges of computer hacking to steal business secrets.

Beijing has tried to appear restrained by doing no more than matching Trump's penalties. But it also has threatened "comprehensive measures" as it starts to run out of American imports for retaliation due to the countries' lopsided trade balance.

The American Chambers of Commerce in China and in Shanghai said last week that half of more than 430 companies that responded to a survey say they have suffered from slower customs approvals and been subject to more environmental and other inspections.

U.S. officials say the World Trade Organization, the global trade regulator, is antiquated and unable to deal with complaints about Chinese-style industrial policies. Beijing agreed this year to join an initiative with the European Union to propose possible reforms.

"We believe we need to uphold the basic international rules and at the same time make improvements to those that need to keep pace with the times," Li said.

Li promised Beijing will refrain from weakening its currency to stimulate exports. China's tightly controlled yuan fell in value against the dollar this year, prompting suggestions Beijing was intentionally depressing its exchange rate to help exporters cope with higher U.S. tariffs. But the central bank has intervened to put a floor under the decline.

"China will never go down the path of stimulating exports by devaluing its currency," Li said.

The premier promised to "improve the business environment" for foreign companies. He affirmed promises to treat companies equally — a condition to which China committed when it joined the WTO in 2001 but that foreign business groups and governments say it regularly violates.

The EU filed a WTO challenge in June to Chinese rules on technology licensing that it said give local companies an unfair advantage.

"We will make sure that all companies, be they Chinese- or foreign-owned, so long as they are registered in China, will be treated as equals," Li said.