The tribes argue President Trump put their members at risk when he reversed President Obama's rejection of the $8 billion TransCanada Corp. project. 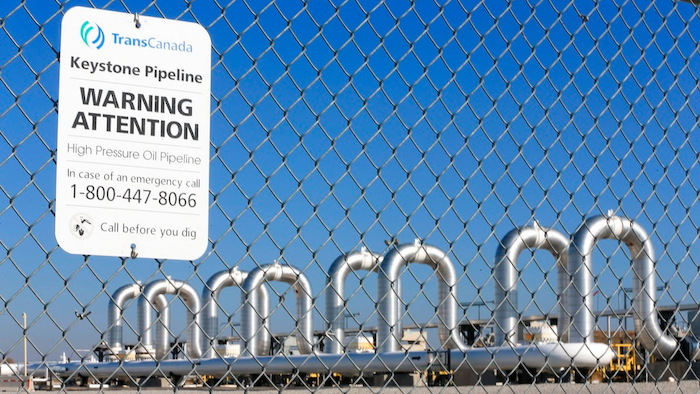 BILLINGS, Mont. (AP) — Native American tribes in Montana and South Dakota sued the Trump administration on Monday, claiming it approved an oil pipeline from Canada without considering potential damage to cultural sites from spills and construction.

The tribes argue President Donald Trump brushed aside their rights and put their members at risk when he reversed President Barack Obama's rejection of the $8 billion TransCanada Corp. project.

The line would carry up to 830,000 barrels (35 million gallons) of crude daily along a 1,184-mile (1,900-kilometer) path from Canada to Nebraska. The route passes through the ancestral homelands of the Rosebud Sioux in central South Dakota and the Gros Ventre and Assiniboine Tribes in Montana.

"The tribes are talking about cultural sites, archaeological sites, burial grounds, graveyards — none of that has been surveyed and it's in the way of the pipeline," said Natalie Landreth, an attorney with the Native American Rights Fund, which is representing the tribes.

The tribes said a spill from the line could damage a South Dakota water supply system that serves more than 51,000 people including on the Rosebud, Pine Ridge and Lower Brule Indian Reservations.

State Department spokeswoman Julia Mason said the agency had no public response to the lawsuit. The department has jurisdiction over the pipeline because it would cross the U.S.-Canadian border.

Calgary-based TransCanada does not comment on litigation and was not named as a party in the case.

In August, U.S. District Judge Brian Morris ordered the State Department to conduct a more thorough review of Keystone XL's path through Nebraska. The move came in response to litigation from environmentalists and after state regulators changed the route.

In yet another lawsuit involving the line, the American Civil Liberties Union and its Montana affiliate sued the U.S. government last week for the release of details related to preparations for anticipated protests against the line.

The groups cited confrontations between law enforcement and protesters, including many Native Americans, which turned violent during construction of the Dakota Access Pipeline through South Dakota.

Keystone Back in Operation