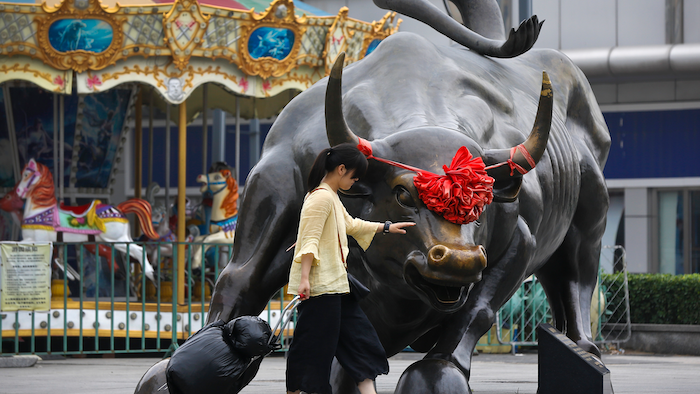 A woman pulls a 2 wheel trolley loaded with goods touches a bull statue on display outside a retail and wholesale clothing mall in Beijing, Monday, July 9, 2018. The trade war that erupted last Friday between the U.S. and China carries a major risk of escalation that could weaken investment, depress spending, unsettle financial markets and slow the global economy.
AP Photo/Andy Wong

BEIJING (AP) — Chinese exporters were scrambling Monday to cope with a plunge in U.S. sales while China's state press shrugged off the impact of Washington's tariff hikes in a spiraling technology dispute.

The general manager of a medical device exporter that makes 15 to 20 percent of its sales to the United States said he plans to fly there this week to negotiate with customers who stopped ordering its syringes and other equipment.

Without new orders, "I will suspend making the products," said Miao. "It is not easy for us to compete with low-end products in other countries."

Other exporters of goods from kitchen appliances and lighting to toys and tools have reported similar drops in U.S. orders.

The state press tried to downplay the impact on China, emphasizing what Beijing says will be the bigger blow to American consumers who will pay more for Chinese goods.

China can find other suppliers for soybeans and other American goods hit by its own retaliatory tariffs, state media said.

"Added tariffs basically have no effect on companies," the chairman of one of China's biggest chemical companies, state-owned Sinochem Group, Ning Gaoning, told the website aweb.com.

Despite official bravado, the conflict adds to mounting economic challenges for Beijing.

Growth already was cooling after regulators tightened controls last year on bank lending to cool surging debt. That spooked investors, who have driven the main stock market index down 21 percent from its Jan. 24 peak.

Trump raised tariffs on $34 billion of Chinese goods in response to complaints Beijing steals or pressures foreign companies to hand over technology.

More broadly, American officials worry Chinese government plans such as "Made in China 2025," which calls for creating competitors in robots, biotech, artificial intelligence and other fields, might erode U.S. technology leadership and prosperity.

Beijing retaliated for the U.S. move by hiking tariffs on American goods including soybeans, whiskey and electric cars. Regulators appeared to be trying to minimize the cost to China by picking goods available from Brazil, Russia, Southeast Asia or other suppliers.

"It won't be difficult for Chinese companies to find replacements for U.S. goods," said Bai Ming, a researcher at the Chinese Academy of International Trade and Economic Cooperation, quoted by the newspaper Global Times.

Alternative suppliers such as Europe, Australia and Brazil "will be likely winners," Rajiv Biswas of IHS Markit said in a report.

A Commerce Ministry statement said Beijing will use revenue from the higher import duties to "alleviate the impact on enterprises and employees" but gave no details. It said importers would be encouraged to shift to buying soybeans and other farm goods from countries that aren't affected by the tariffs.

The United States buys about 20 percent of China's exports, but trade has shrunk as a share of the Chinese economy.

Still, the impact could spread as Chinese factory demand for components from Japan, South Korea, Taiwan and Southeast Asia slumps.

That could cut next year's Asia-Pacific economic growth by up to 1 percentage point, according to Biswas.

It said that might be intended to avoid antagonizing the American leader and hindering negotiations.

Other exporters including makers of solar panels already were stepping up marketing in Asian and other markets. They are trying to make up for the loss of U.S. and European sales following higher tariffs imposed over complaints they sell at improperly low prices.

Solar exporter Jiangsu Akcome Science & Technology Co. makes about 15 percent of its sales to the United States, while Japan and South Korea are 25 to 30 percent, its general manager, Hu Jingnang, told the newspaper Wuxi Daily.