Employers and U.S. consumers weigh the perils of a prolonged economic rift against America's healthiest job market in years. 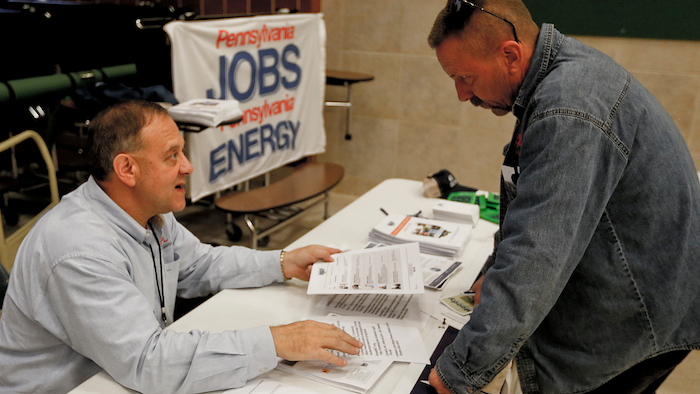 In this Thursday, Nov. 2, 2017, photo, a recruiter in the shale gas industry, left, speaks with an attendee of a job fair in Cheswick, Pa. Employers in the United States are thought to have kept up their brisk pace of hiring in June 2018, reflecting the durability of the second-longest U.S. economic expansion on record even in the face of a trade war with China. Economists have estimated that 195,000 jobs were added last month and that the unemployment rate remained at an 18-year low of 3.8 percent, according to data provider FactSet.
AP Photo/Keith Srakocic, File

WASHINGTON (AP) — From the safety of a resilient U.S. economy, President Donald Trump lit the fuse Friday on a high-risk trade war with China.

History suggests that a cycle of tariffs and retaliations can eventually choke economic growth. But for now, employers, investors and U.S. consumers are weighing the perils of a prolonged rift between the world's two largest economies against a far more positive backdrop: America's healthiest job market in years.

Evidently confident despite the risks ahead, U.S. employers have added jobs this year at a robust monthly average of 214,500. Many businesses say they've reached the point where they can't even find enough people to fill jobs. Unemployment is at a low 4 percent.

All that hiring is occurring in an economic expansion that is entering its 10th year — the second-longest streak on record. The U.S. financial markets, while wary of the trade fights Trump has pursued, have swung this year between modest gains and losses but have avoided any sustained panic.

"The robustness of the economy — and it's stronger than it has been in decades — inoculates Trump's trade policy moves from closer scrutiny," said Daniel Ikenson, director for trade policy studies at the libertarian Cato Institute.

Most employers see the economy as having achieved a comfortable cruising speed and have kept hiring. In surveys of business sentiment, they have expressed concerns about the tariffs, but their wariness has yet to disrupt their business plans.

The United States added 213,000 jobs in June, and an influx of new jobseekers, seemingly optimistic about their prospects but not finding work right away, lifted the unemployment rate from 3.8 percent to 4 percent, the government reported Friday.

Helping propel growth, business and consumers have received a $136 billion stimulus this year from tax cuts. Quarterly economic growth is on track to be the strongest since 2014. Housing starts are up 11 percent so far this year.

From this position of strength, President Donald Trump is gambling that he can deploy tariffs to his advantage even though they will inflict some pain on businesses and consumers that backed him in 2016. The Trump team's calculation appears to be that foreign countries have no choice but to trade with the world's largest economy and will ultimately have to yield.

The president hopes to extract concessions not only from China but also from such long-standing allies as the European Union, Canada and Mexico. His stated goal is to reduce U.S. trade imbalances and create more U.S. manufacturing jobs.

So far, the economy can absorb the costs of the new tariffs, including separate steel and aluminum import taxes, without suffering a crushing hit. But the pain could intensify. Trump has threatened a 20 percent tariff on roughly $50 billion of auto imports from the European Union. Those tariffs could lead to reciprocal taxes from other countries that could hurt U.S. automakers and lead to layoffs.

Trump has warned that he may eventually impose tariffs on more than $500 billion of Chinese imports. He said in a speech in Montana last week that other countries will agree to his terms — "and if they don't, we'll actually do better."

"Our allies, in many cases, were worse than our enemies," the president said. "We opened our country to their goods, but they put up massive barriers to keep our products and our goods the hell out of their country because they didn't want that competition."

From soybean farmers and pork producers to the motorcycle manufacturer Harley Davidson, numerous American exporters are facing upheavals from the tariffs.

Still, some U.S. companies are benefiting. Braidy Industries, for example, just broke ground on an aluminum mill near Ashland, Kentucky. It says it's already sold twice the plant's capacity for the first seven years of production after actions by the U.S. government to protect America's aluminum industry.

Craig Bouchard, Braidy's CEO, said an expansion of U.S. tariffs on imported aluminum is helping to allow for the 600 mill jobs he's adding in Appalachia and the thousands of jobs indirectly supported by the plant.

So far, most economists view Trump as jockeying for more favorable trade rules rather than welcoming a prolonged conflict with America's trading partners. Administration officials have encouraged this view.

"He's going to deliver better deals," Kevin Hassett, chairman of the White House Council of Economic Advisers, said on FOX Business Network. "He's called the bluff of other countries that have basically been abusing ... our workers for a long time and — but he wants better deals."

Bill Adams, a senior economist at PNC Financial Services, said that a truly destructive trade war is "still not our base case expectation, but it is less farfetched than it seemed" earlier this year.

A calamitous trade war would likely be the "result of miscalculation or unintended consequences, rather than an explicit goal," Adams added.

If it happened, the Trump-led economy could eventually buckle under the weight of protectionist trade policies.

"The longer tariffs last and the wider they become, the more they will dampen hiring and investment by U.S. businesses engaged in global value chains," Adams said.

Trade War Forces Changes for Some