A new agreement has cleared the way for the San Jacinto Waste Pits to finally be cleaned up, but dioxin damage has already has spread far beyond that. 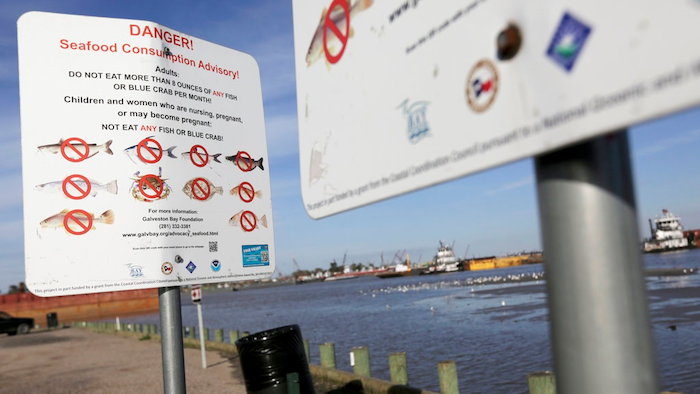 In this March 1, 2018 photo, signs warn people not to fish or crab at River Terrace Park in Channelview, Texas, one of four county parks adjacent to hotspots in the San Jacinto River Waste Pits.
Elizabeth Conley/Houston Chronicle via AP

HIGHLANDS, Texas (AP) — Evelyn and Jerome Matula were still polka-dancing newlyweds in 1950 when they spotted a half-finished cottage in the woods along the San Jacinto River east of Houston. It seemed idyllic, with panoramic views and a sandy path to the river, where their three children and later their grandchildren fished. Now, the retired refinery worker and former educator fear their kin were poisoned by carcinogenic dioxin in the fish and well water.

Decades ago, paper mill waste barged down the Houston Ship Channel was buried across the river. From their bluff today, the Matulas can see orange buoys marking a federal Superfund hazardous waste site established in 2008.

An agreement announced last month has cleared the way for the San Jacinto Waste Pits to finally be cleaned up. But dioxin damage already has spread far beyond the waste pits, the Houston Chronicle and The Associated Press found.

More than 30 hotspots — small sites where dioxin has settled — have been located in sediments along the river, the Houston Ship Channel and into Galveston Bay, according to University of Houston research conducted from 2001 to 2011 and pieced together by the news organizations.

The affected areas are alongside parks and residential neighborhoods with thousands of homes. But the residents' wells or yards have not been tested by state health officials.

Details about the hotspots have not been made public by Texas environmental regulators, who used more than $5 million in federal money to pay for the research. In 2012, they ended a fact-finding committee that oversaw the project and had proposed new standards for dioxin and PCBs that could have been costly to corporate polluters.

The Texas Commission on Environmental Quality refused to release the full results of the studies that identified the sources of dioxin and PCBs, even to academic researchers, Harris County officials and lawyers who later sued companies over environmental damage. The research funding ended in 2011, leaving unanswered questions about whether toxic damage spread even farther during hurricanes Ike and Harvey.

The university data linked hotspots primarily to three sources: the leaking waste pits, the original site of the paper mill in Pasadena and a major chemical complex in nearby Deer Park that is part of another Superfund site, records show. None has been cleaned up.

Under the Clean Water Act and state law, Texas authorities were required to address dioxin and PCBs in the river and ship channel, waterways officially designated as "impaired." Setting such standards could have forced the responsible companies to clean up and upgrade contaminated stormwater and wastewater treatment.

All three TCEQ commissioners, appointed by the governor, declined an interview request.

Carl Masterson, a former Houston-Galveston Area Council staffer who for years served as a facilitator for the committee, said state regulators failed to do their duty. Once "the meetings were done, the project was over and the findings were in, the TCEQ should have approved" the committee's recommendations, he said.

In a statement, the agency said it's still working on "a document summarizing the source characterization of dioxin loads in the Houston Ship Channel/Upper Galveston Bay system."

The state's approach to dioxin follows the same pattern the Chronicle and AP previously identified in an investigation into air and water pollution releases from Hurricane Harvey. The news organizations found that state and federal regulators did little in response to massive releases of toxic pollution reported during and after Harvey's torrential rains.

Similarly, Texas regulators have not followed up on the dioxin research with additional testing to see if wells, parks or property also are contaminated by the pollutants that formed the toxic hotspots.

In the Matulas' case, their grandson Sean, a 33-year-old emergency manager, paid to have samples from the cottage's two wells tested after learning he suffers from long-hidden heart and kidney defects that may shorten his life.

His mother had moved to the cottage when she was pregnant with him. Recent test results showed that the family well used at the time he was born tested at twice the level of dioxin considered healthy for human consumption.

"I have been told," Sean Matula said of conversations with his doctor, "that I am lucky to be walking."

The Texas Department of Health Services warned in 1990 that catfish and crabs in the San Jacinto and parts of upper Galveston Bay area contained so much dioxin that local seafood posed potential health risks — and banned its consumption by children and pregnant women.

The Environmental Protection Agency already had been funding initiatives to clean up the nation's impaired rivers and identify sources of toxic substances in sediments and water that poisoned fish. The actions came in response to revelations in the 1980s that one of the most dangerous dioxin forms had been unleashed into the environment from paper bleaching and chemical manufacturing.

Even in microscopic doses, those dioxin types have been linked to birth defects as well as cancer and reproductive problems.

Some of the most likely sources were two former paper mills and the huge chemical complex in Deer Park. Then a state park employee discovered sand pits near a highway bridge where pulp from the larger paper mill in Pasadena had been barged in the 1960s, buried and forgotten.

A video of the site taken around 2009 shows that fishermen and others had carved a path across unmarked sand pits partially submerged by the river. Particles of what looks like an egg carton were shearing off the shore into the water. Those crystalline fragments are examples of dioxin sediment, said Larry Koenig, who for 10 years was the TCEQ staff member assigned to the dioxin study.

He and other experts have estimated that about half the waste originally buried in pits already had escaped into the environment before the site was rediscovered.

Koenig retired in 2010, in part, he said, because of frustration over inaction on any proposed water quality standard.

A dozen hotspots identified by teams of University of Houston researchers were scattered around those pits.

Some of the worst hotspots became part of the San Jacinto Waste Pits Superfund site a decade ago. But others are miles downstream, near riverside neighborhoods in Baytown and LaPorte.

Another source of hotspots was chemical plants along Patrick Bayou in Deer Park, according to the committee's reports and research. The bayou had been identified as a priority site for Superfund cleanup even before the state committee's dioxin water quality work began.

The committee formed by state regulators to study dioxin included representatives of two companies ultimately found to be major contamination sources: Shell Chemical and OxyVinyls, a subsidiary of Occidental Chemical.

By 2009, the corporate representatives, along with environmentalists and government officials, had reviewed proposed water quality standards for PCB and dioxin that could have sparked regulatory or legal action against their companies.

Most of Patrick Bayou's dioxin and PCB pollution was from historic industrial activities. But Shell and Occidental Chemical would likely have faced pressure to address contaminated runoff, according to TCEQ documents, UH research, EPA records and Hanadi Rifai, the UH environmental engineering professor who oversaw the research teams.

Representatives of OxyVinyls and Shell expressed no objections to proposed pollution-reduction reforms in public meetings, according to minutes and interviews.

But EPA records show that during the time the dioxin cleanup committee was making its recommendations, neither company had agreed to pay to address polluted Patrick Bayou. EPA subsequently named Shell Chemical, Occidental Chemical and Lubrizol, all chemical companies with operations in Deer Park, as "potentially responsible parties", according to EPA records.

The companies still have not agreed to fund the cleanup of Patrick Bayou, 16 years after the area was designated as a Superfund site.

At the San Jacinto Waste Pits, federal officials said in April that International Paper Company and McGinnis Industrial Maintenance Corporation had pledged to pay design costs for the plan to remove 161,000 tons of carcinogenic paper mill waste buried there in the 1960s.

Ray Fisher, a Shell spokesman, said the company continues to collaborate "with other relevant parties" on the Patrick Bayou site, adding, "Our focus is on safety of our people and community."

Eric Moses, an Occidental Chemical spokesman, said the company is working with others to complete investigation of the site "and implement effective controls and remedies that will be protective of human health and the environment."

Both Shell and Occidental Chemical have acted more quickly to address dioxin and other pollutants at multiple Superfund sites in other states, EPA records show.

In 2012, the Texas Department of State Health Services delivered its public health assessment of dioxin in the waste pits. The report again warned of hazards posed to fish, but it dismissed the idea of contamination in neighborhoods' soil or well water.

Rifai said UH's studies of river water and sediment could not be used to determine whether yards, parks or well water was safe. She is now working with the Galveston Bay Foundation, an independent nonprofit, and Harris County to conduct more testing after Harvey's flooding.

The Matulas have two wells on the cottage property. For decades, they drank from the older, shallow well. About 10 years ago, they dug a deeper one.

After Sean Matula paid for testing, he asked state health officials to review the complex lab reports. They found dioxin in the older well to be more than twice what the EPA considers dangerous for humans of any age to drink. Dioxin levels in the newer well represented an increased risk of cancer for children and adults but were within EPA's drinking water limits.

Houston lawyer Richard Mithoff represents the Matulas and another 600 families. He says he believes he will be able to prove that cancer, birth defects and other ailments reported by many clients who lived around the pits are directly related to the dioxin in the river and its fish.

The EPA cleanup of the waste pits won't undo damage done to those who lived there, Mithoff said, "but it certainly holds great promise for the future and those living there now will be able to rest a little easier."