Messages left by The Associated Press with Cloudwick were not immediately returned Tuesday.

The department said companies hiring foreign workers with the special H1-B visas are required to pay minimum salaries. Some employees were allegedly promised salaries up to $8,300 per month, but instead received $800 net per month, the department said.

Companies that hire foreign workers with H1-B visas must show a shortage of U.S. workers with specialized skills.

"The intent of the H-1B foreign labor certification program is to help American companies find the highly skilled talent they need when they can prove that a shortage of U.S. workers exists," Department spokeswoman Susana Blanco said. "The resolution of this case demonstrates our commitment to safeguard American jobs, level the playing field for law-abiding employers, and protect guest workers from being paid less than they are legally owed."

The Newark, California-based company agreed to hire an outside monitor to ensure future compliance.

Silicon Valley companies and high-tech ventures are among the largest employers of foreign workers with H-1B visas. The number of visas awarded each year is capped at 85,000.

The H-1B visa program is part of that review.

Why Trump's Plan to Forbid Spouses is a Bad Idea 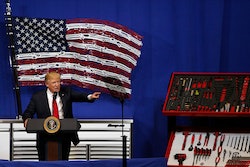