Farmers and scientists from around the country met last month to create the standards for an additional organic certification program. 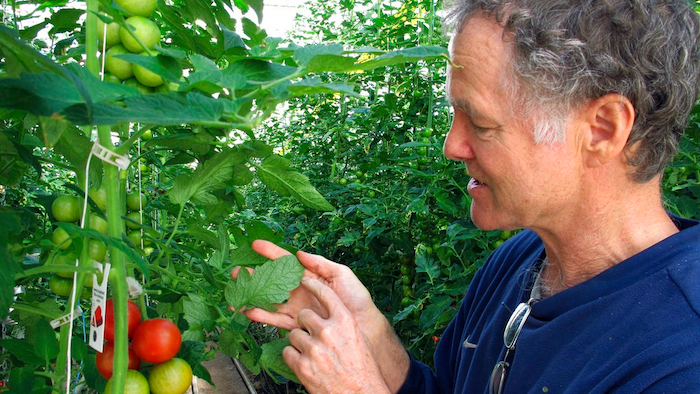 In this April 2, 2018, photo, Dave Chapman, owner of Long Wind Farm, checks for insects on organic tomato plant leaves in his greenhouse in Thetford, Vt. Chapman is a leader of a farmer-driven effort to create an additional organic label that would exclude hydroponic farming and concentrated animal feeding operations.
AP Photo/Lisa Rathke

THETFORD, Vt. (AP) — Was your tomato grown in dirt or water? Organic shoppers might notice additional labels this summer that will give them the answer — and tell them whether their choices align with what a rebellious group of farmers and scientists deem the true spirit of the organic movement.

About 15 farmers and scientists from around the country met in Vermont late last month to create the standards for an additional organic certification program, which they plan to roll out nationally to between 20 to 60 farms as a pilot this summer.

Under the current U.S. Department of Agriculture program, the organic label means that your tomato has been produced without synthetic substances — with some exceptions — and without certain methods, like genetic engineering. The additional label, which does not yet have a name or wording, would indicate that a tomato, for example, has been grown in soil, and that meat and dairy products came from farms that pasture their animals.

An inspector would certify that the farm has complied with the new standards, and the farms — not distributors — would add the label.

The move comes five months after the National Organic Standard Board, which advises the U.S. Department of Agriculture, voted against a proposal to exclude from the USDA's organic certification program hydroponics — raising plants with water but no soil — and aquaponics, in which plants and aquatic animals, such as fish, are grown within one system.

"I think that a lot of farmers, especially young farmers, feel that the organic label no longer describes the way they farm, and we're trying to recapture that," said Linley Dixon, a vegetable farmer in Durango, Colorado, and senior scientist for Cornucopia Institute, who is also on the standards board of the Real Organic Project.

The group creating the new label, which calls itself the Real Organic Project, said it has not abandoned the National Organic Program, which is the federal standard, and is not attacking organic farmers.

"Some of the cornerstones of what organic means are being taken away, and we're concerned about how creaky that makes the whole thing," said Dave Chapman, a member of the executive and standards board of the Real Organic Project and owner of an organic tomato farm in Thetford. He believes the cornerstone of being organic is growing in soil and improving its fertility.

To Dixon, "organic" means a very diversified operation, rotating animals and crops and planting cover crops to control erosion, increase organic matter in the soil and manage weeds, among other things.

The new label would exclude from certification hydroponic farming and large livestock farms that don't pasture their animals, known as contained animal feeding operations or CAFOs.

The hydroponic industry argues another label would mislead and confuse consumers and is a way for the traditional organic farmers to try to get a competitive edge.

"It's a competition because field farmers can't produce the volume that hydroponics can," said Dan Lubkeman, president of the Hydroponic Society of America.

While shopping at Hunger Mountain food cooperative in Montpelier, Jessica Manchester, of Worcester, agreed labeling is getting confusing for the average consumer but in the long run thinks it's good to know where food comes from. She said she prefers produce grown in soil.

"I'm just in favor of plants growing in their natural way and being in connection with the microbes in the soil and the interactions those microbes have with the plant roots," Manchester said.

But fellow shopper Laurie Griggs, of Calais, said she doesn't buy totally organic and doesn't mind if vegetables or berries are raised hydroponically.

"I just think we need new ways to grow things," she said. "We've got a lot of people and farming's really hard on the land, and if we can find ways to lighten our impact on the land and grow healthy food for people, I have no problem with it."

The farmers involved want a more transparent label and will not see an economic benefit at first, Chapman said. The program is now being funded by contributions. Farmers would pay a fee to be certified, but he doubts that would cover the cost of the program.

"I hope the day will come where there will be an economic benefit because I know that there are millions of people in the country who actually do care about whether food is grown in the soil and whether the animals have access to the pasture," he said.