Trump says the online retailer pays 'little or no taxes' and uses the U.S. Postal Service as 'their Delivery Boy.' 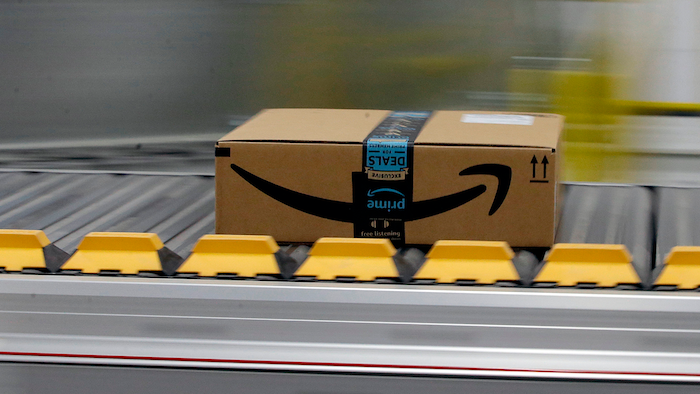 In this Feb. 9, 2018, file photo, a box for an Amazon prime customer moves through the new Amazon Fulfillment Center in Sacramento, Calif. President Donald Trump took another shot at Amazon.com on Thursday, March 29, tweeting that the online retailer pays “little or no taxes” and that it uses the U.S. Post Service as a “Delivery Boy.”
AP Photo/Rich Pedroncelli

NEW YORK (AP) — President Donald Trump took another shot at Amazon.com Thursday, tweeting that the online retailer pays "little or no taxes" and that it uses the U.S. Postal Service as "their Delivery Boy."

Trump's frustrations with Amazon are no surprise. He has accused the company of not paying enough taxes before, and in December tweeted that the U.S. Postal Service should charge Amazon more for delivering packages. His latest missive comes a day after Axios reported that Trump has wondered aloud if there was a way to "go after" Amazon with antitrust or competition law.

"I have stated my concerns with Amazon long before the Election," Trump tweetedThursday. "Unlike others, they pay little or no taxes to state & local governments, use our Postal System as their Delivery Boy (causing tremendous loss to the U.S.), and are putting many thousands of retailers out of business!"

Amazon has grown rapidly since it launched in 1995 as a site that mostly sold books. It has changed the way people buy diapers, TVs and just about anything else. Toys R Us and other retailers that have filed for bankruptcy or gone out of business have said that Amazon's low prices were hard to compete with. But industry analysts also say that some disappearing retailers were slow to adapt to the shift to online shopping.

Seattle-based Amazon has fought for years against collecting sales tax, but now collects it in states that have a sales tax. White House spokeswoman Lindsay Walters said Thursday that some Amazon users don't pay sales taxes, such as third-party vendors who sell their goods through the site.

Amazon.com Inc. did not respond to a request for comment.

As for the Postal Service, it has lost money for years, but online shopping has led to growth in its package-delivery business. And Amazon signed a deal in 2014 with the post office to deliver packages on Sundays.

A spokesman for the U.S. Postal Service declined to comment.

Analysts at Stifel said the president's tweets on the topics does not seem "detrimental to Amazon." Amazon's stock, which is up more than 65 percent in the last 12 months, rose 1 percent to close at $1,447.34 Thursday.

Trump has targeted Amazon for other reasons in the past: its founder and CEO Jeff Bezos personally owns The Washington Post, and Trump has called the newspaper "fake news" and a "guardian of Amazon" after it published unfavorable stories about him or his administration.

White House spokesman Raj Shah said in a TV interview Thursday that Trump's tweets are not about Bezos, but that mom-and-pop shops and brick-and-mortar stores are having trouble competing with fast-growing Amazon.

"Tax policy, and other policy, has to catch up...so those who are competing with Amazon are on a level playing field," Shah said on Fox News show "Fox & Friends." But he also said, "We're not laying out specific policies."