Trump has declared that the U.S. will impose punishing tariffs on steel and aluminum imports. 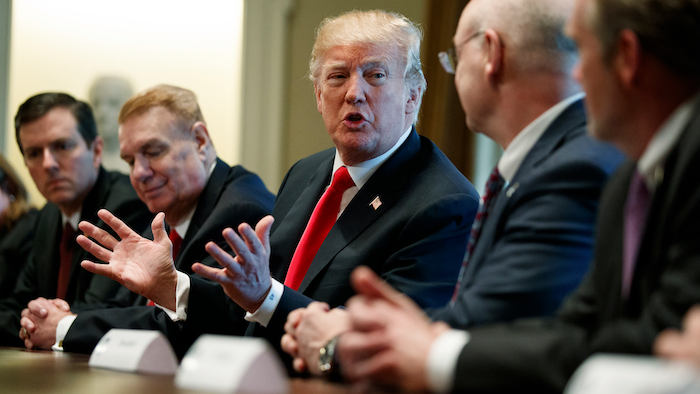 WASHINGTON (AP) — President Donald Trump on Friday insisted "trade wars are good, and easy to win," a bold claim that prompted pushback from a Nebraska Republican who quipped "kooky 18th century protectionism will jack up prices on American families."

Trump has declared that the U.S. will impose punishing tariffs on steel and aluminum imports, escalating tensions with China and other trading partners and raising the prospect of higher prices for American consumers and companies. After the announcement Thursday, stocks closed sharply lower on Wall Street. China has expressed "grave concern."

Early Friday, Trump took to Twitter to defend himself: "When a country (USA) is losing many billions of dollars on trade with virtually every country it does business with, trade wars are good, and easy to win. Example, when we are down $100 billion with a certain country and they get cute, don't trade anymore-we win big. It's easy!"

"Kooky 18th century protectionism will jack up prices on American families -- and will prompt retaliation from other countries," he wrote in a statement. "Make no mistake: If the President goes through with this, it will kill American jobs -- that's what every trade war ultimately does. So much losing."

Trump's announcement came only after an intense internal White House debate. It brought harsh criticism from some Republicans and roiled financial markets with concerns about economic ramifications.

Overseas, Trump's words brought a stinging rebuke from the president of the European Commission, Jean-Claude Juncker, who denounced his plan as "a blatant intervention to protect U.S. domestic industry." Juncker said the EU would take retaliatory action if Trump followed through.

While not immediately offering a specific response on what it would do, the Chinese Commerce Ministry statement said: "The Chinese side expresses grave concern." The ministry said Beijing has satisfied its trade obligations and appealed to Washington to settle disputes through negotiation.

Beijing faces mounting complaints from Washington, Europe and other trading partners that it improperly subsidizes exports and hampers access to its markets in violation of its free-trade commitments.

Should restrictions be imposed on Canadian steel and aluminum products, Canada will take responsive measures to defend its trade interests and workers."

Trump, who has long railed against what he deems unfair trade practices by China and others, summoned steel and aluminum executives to the White House and said next week he would levy penalties of 25 percent on imported steel and 10 percent on aluminum imports. The tariffs, he said, would remain for "a long period of time," but it was not immediately clear if certain trading partners would be exempt.

However, critics raised the specter of a trade war, suggesting other countries will retaliate or use national security as a reason to impose trade penalties of their own.

Trump's move will likely raise steel and aluminum prices here. That's good for U.S. manufacturers. But it's bad for companies that use the metals, and it prompted red flags from industries ranging from tool and dye makers to beer distributors to manufacturers of air conditioners. The American International Automobile Dealers Association warned it would drive prices up "substantially."

"This is going to have fallout on our downstream suppliers, particularly in the automotive, machinery and aircraft sectors," said Wendy Cutler, a former U.S. trade official who is now vice president of the Asia Society Policy Institute. "What benefits one industry can hurt another. What saves one job can jeopardize another."

The decision had been strenuously debated within the White House, with top officials such as economic adviser Gary Cohn and Defense Secretary Jim Mattis raising concerns.

Mattis, in a memo to Commerce, said U.S. military requirements for steel and aluminum represent about 3 percent of U.S. production and that the department was "concerned about the negative impact on our key allies" of any tariffs. He added that targeted tariffs would be preferable to global quotas or tariffs.

Plans for Trump to make an announcement were thrown into doubt for a time because of the internal divisions. The actual event caught some top White House officials off guard and left aides scrambling for details. Key Senate offices also did not receive advance notice.

White House press secretary Sarah Huckabee Sanders said the decision "shouldn't come as a surprise to anyone," noting that the president had been talking about it "for decades." On Friday, she told reporters that Trump wasn't concerned about the day's market decline, adding that the "president is still focused on long term economic fundamentals."

Sasse wasn't the only Republican in Congress who was plainly upset.

GOP Sen. Pat Roberts of Kansas, chairman of the Senate Agriculture Committee, said, "Every time you do this, you get a retaliation and agriculture is the No. 1 target." House Speaker Paul Ryan, R-Wis., said through a spokesman he hoped Trump would "consider the unintended consequences of this idea and look at other approaches before moving forward."

Trump met with more than a dozen executives, including representatives from U.S. Steel Corp., Arcelor Mittal, Nucor, JW Aluminum and Century Aluminum. The industry leaders urged Trump to act, saying they had been unfairly hurt by a glut of imports.

"We are not protectionist. We want a level playing field," said Dave Burritt, president and chief executive officer at U.S. Steel.