More than 80 companies have not yet confirmed the safety of the products in question. 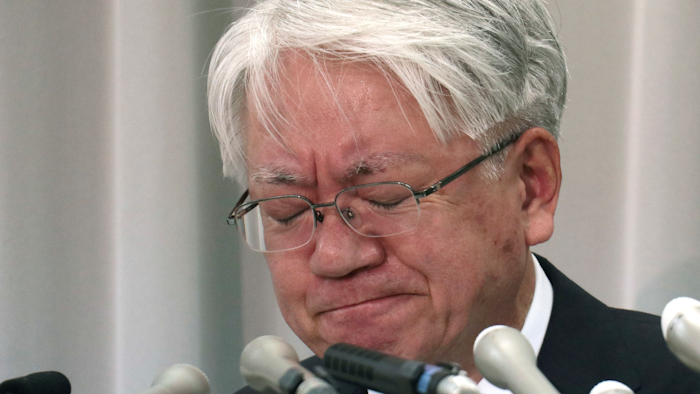 Kobe Steel President and CEO Hiroya Kawasaki reacts as he listens to a reporter's questions during a press conference in Tokyo, Thursday, Oct. 26, 2017. Kobe Steel says it has lost a Japan Industrial Standards certification for some of its copper products after reporting faked quality inspections for a slew of products used in cars, trains, aircraft and other equipment.
AP Photo/Shizuo Kambayashi

TOKYO (AP) — Kobe Steel said Thursday it had found four new cases of faked inspections data that has been found in hundreds of its products, as Japan's quality assurance agency withdrew certification for some of its copper tubes.

The company reported that 88 companies out of 525 known to have been affected by falsified inspections data had not yet confirmed the safety of the products in question. The metals products are used in all sorts of equipment, cars, trains and aircraft.

"I believe the root causes of the problem have been addressed following our voluntary investigation," the Kyodo news service quoted Kobe Steel's CEO Hiroya Kawasaki as saying.

Japan's trade minister said Thursday that he believed the problems at the 112-year-old company, one of Japan's top manufacturers, were exceptional rather than typical despite a spate of similar scandals at major automakers and other companies.

Earlier this week, the government said it had recommended that regulators check all the company's facilities.

The Japan Quality Assurance agency withdrew its certification for products affected by the bogus inspections at a Kobe Steel subsidiary outside Tokyo.

It said that copper and copper alloy seamless tubes from its subsidiary Kobelco & Materials Copper Tubing in Hatano, southwest of Tokyo, will no longer qualify for the Japan Industrial Standards certification. However, they may still be supplied to customers if they meet quality specifications.

So far there have been no reports of specific safety risks linked to the bogus inspections data.