State Senate Majority Leader Scott Fitzgerald said he hopes the package can clear the Legislature within the next couple of weeks. 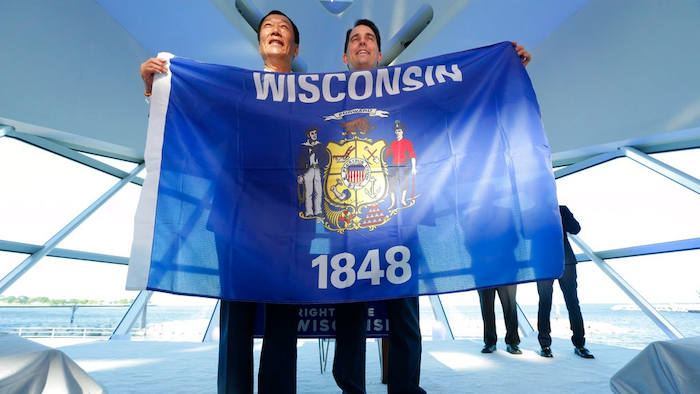 MADISON, Wis. (AP) — The Wisconsin Senate's top Republican signaled Thursday that he's ready to act on an incentives bill that would bring a Foxconn plant to the state's southeastern corner because he's received assurances that state officials will know how quickly the company will create jobs.

Senate Majority Leader Scott Fitzgerald has said over the last few days that he doesn't know if he has the votes to pass the bill, that it doesn't spell out when Foxconn will add the jobs and that he thinks the Legislature should focus on passing a state budget, which is overdue. Assembly Republicans, meanwhile, plan to take the first votes on the bill next week, putting pressure on Fitzgerald to take action.

Fitzgerald emerged from a meeting with his members and members of Gov. Scott Walker's cabinet late Thursday afternoon and told reporters he didn't count votes but felt more confident. He was told the state will enter into a contract with Foxconn to enact provisions in the bill and that deal will include a timeline for job creation. He said the Legislature's budget-writing committee will likely hold a hearing on the incentives bill on Aug. 22 and take the rest of that week to finish the state budget.

"If we can get both of these things done simultaneously, we'd be in a good position to wrap up the budget," he said.

He had complained that Assembly Republicans were drafting amendments without consulting the Senate but said he has now seen the additions to the bill. One of them is based on locating the plant in Racine County, he said, but he had no other details.

President Donald Trump announced last month that Foxconn decided to build a plant in southeastern Wisconsin. The company has said the facility could eventually employ up to 13,000 people.

Walker has introduced a bill that would lay out $3 billion in tax breaks for Foxconn, including up to $1.5 billion in payroll tax credits and up to $1.35 billion in tax credits on expenditures for fixed assets such as land and buildings. Walker's campaign sent out an email Thursday promising Foxconn will bring "tens of thousands of jobs" to the state and asking people to sign a petition saying they support the company's arrival.

Fitzgerald has said he's concerned about a fiscal analysis that found the state wouldn't break even on the incentives package for at least 25 years. He backed off that during an interview with the regionally syndicated radio program "The Jerry Bader Show" on Thursday morning, saying he's more concerned with what might happen five or 10 years down the road.

He has also complained about Assembly Speaker Robin Vos drafting amendments to the plan without Senate input — Vos represents Racine County — but said after the caucus meeting that he has now seen all of them.

Fitzgerald reiterated during the radio interview that the budget needs to get done to enable the incentives bill to take effect. The bill calls for borrowing $252 million for highway improvements around the plant. Fitzgerald has said that part of the package complicates solving a $1 billion deficit in the state's transportation fund.

GOP infighting over how to fill the shortfall has stalled the budget, which was due July 1. Walker and Fitzgerald want to borrow money and delay projects; Vos wants to raise more revenue and has suggested raising the gas tax, a move Walker has rejected as he prepares for a re-election campaign next year.

Despite all that, Fitzgerald said he hopes the package can clear the Legislature within the next couple of weeks.

"Nobody wants to fumble the ball here," Fitzgerald said on the radio show. "You've got to get members in the right place to support this. It takes a while to get there."

Foxconn U.S. Headquarters to be in Milwaukee