Tensions between the world's two biggest economies are flaring again. 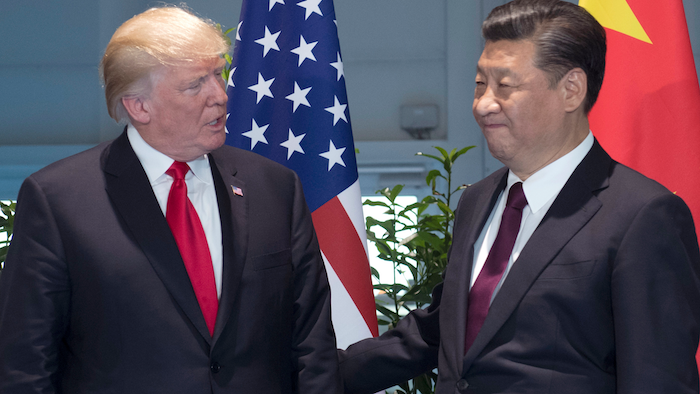 In this Saturday, July 8, 2017, file photo, U.S. President Donald Trump, left, and Chinese President Xi Jinping arrive for a meeting on the sidelines of the G-20 Summit in Hamburg, Germany. After a cordial meeting between Trump and Xi in April 2017, tensions are simmering again between the world’s two biggest economies. As U.S. and Chinese economic officials prepare to meet Wednesday, July 19, in Washington, the U.S. is weighing whether to slap tariffs on steel imports and risk setting off a trade war, a dicey option to deal with a problem caused largely by China’s massive overproduction of steel.
Saul Loeb/Pool Photo via AP, File

WASHINGTON (AP) — Cake and conversation, it seems, can go only so far to mend longstanding economic rifts between the United States and China.

As officials of the two sides began meeting Wednesday, Chinese Vice Premier Wang Yang said the two countries depend on each other economically and warned that "confrontation will immediately damage the interests of both."

Obstacles to cooperation loom. The Trump administration is considering slapping tariffs on steel imports, a step that risks igniting a trade war. For the United States, it's a perilous option to address a problem caused largely by China's overproduction of steel.

And Trump is criticizing China again for failing to use its economic leverage to rein in its neighbor and ally, the nuclear rogue state North Korea.

Could this week's U.S.-China Comprehensive Dialogue produce a meaningful breakthrough in economic relations?

Most China watchers are skeptical.

"I'm not looking for anything worthwhile," says Derek Scissors, a China specialist at the conservative American Enterprise Institute.

For one thing, the points of difference between the two countries run deep. For another, Xi faces political pressures at home and won't want to cause a stir in Beijing.

For all the tensions between the two nations, Trump's words about Xi himself have remained warm. He has suggested that the personal bond he formed with Xi when the two met April 6-7 at Trump's Mar-a-Lago resort can overcome fundamental differences on trade and national security. Last week, the president called his Chinese counterpart a "friend of mine," ''a terrific guy" and "a very special person."

At a White House event Monday, Trump suggested that the relationship is so strong that he asked during the Florida summit to start exporting U.S. beef to China and that the request was quickly granted. Trump said that the beef industry was so pleased to return to China after a 14-year ban that one executive from Nebraska "hugged me, he wanted to kiss me so badly."

"We welcome this opportunity," Kenny Graner, a North Dakota cattle farmer who is president of the U.S. Cattlemen's Association, says of the China market. "They have a middle class that's growing in income. It's big, a lot of people."

After the meeting, the president softened his accusations of abusive Chinese practices, dropped his threat to label China a currency manipulator and expressed optimism that China would pressure North Korea to scale back its nuclear program.

Still, the Trump-Xi relationship has yet to deliver the substantive changes that Trump the candidate had promised voters — a core piece of his mantra to put "America first." The economic irritants are likely to vex U.S. and Chinese officials this week.

Trump had campaigned on a promise to shrink America's trade deficits, which he blames for wiping out American factories and manufacturing jobs. The United States last year ran a trade deficit in goods with China of $347 billion, the amount by which imports exceeded exports. It's by far the widest gap that U.S. has with any country.

"If (the gap) was just the product of free-market forces, we could understand," Commerce Secretary Wilbur Ross said at the opening of the dialogue Wednesday. "But it's not." The Trump administration argues that China unfairly subsidizes its exports.

Take steel. From 2000 to 2016, China accelerated steel production, raising its share of the world market from 15 percent to nearly 50 percent. As Chinese steel poured into the market, global prices fell, hurting American steelmakers. Scissors notes that China has long promised to stop subsidizing steel and to slow production but hasn't delivered.

The Trump administration responded by invoking a little-used weapon in American trade law that lets the president tax or restrict imports — if a U.S. Commerce Department investigation finds that they imperil national security. (The result of Commerce's investigation of steel imports is expected soon.) The rationale was that the American military relies on steel for airplanes, ships and other equipment. Steel also goes into roads, bridges and other infrastructure.

The problem is that the United States already blocks most Chinese steel imports. So any tariffs or limits on imports would instead hurt other countries, including such staunch allies as Canada and South Korea.

Scissors says the United States could try to coordinate sanctions against China by countries that do import Chinese steel.

David Dollar, a former World Bank and U.S. Treasury official who is now at the Brookings Institution, thinks Xi isn't likely to make a bold move to cut Chinese steelmaking capacity — or enact other economic reforms — in advance of the Chinese communist party's National Congress this fall. At the meeting, Xi will want to further tighten his grip on the party.

What's more, the European Union and others are likely to lash back if the U.S. imposes sanctions on foreign steel, thereby running the risk of a broader trade war.

Then there's North Korea. As a presidential candidate, Trump attacked China for refusing to pressure Pyongyang to back off from developing nuclear weapons. After the Mar-a-Lago summit, though, Trump praised Beijing for agreeing to help deal with North Korea. As a reward, he abandoned his vow to accuse China of manipulating its currency to benefit Chinese exporters.

This month, North Korea defiantly proceeded with its first launch of an intercontinental ballistic missile. Trump tweeted his complaint:

"Trade between China and North Korea grew almost 40% in the first quarter. So much for China working with us — but we had to give it a try!"

Overall, Brookings' Dollar expects more turbulence between Washington and Beijing. The Obama administration, he notes, had kept the relationship stable despite economic differences by working with China on such issues as the Paris climate agreement and the Iran nuclear deal. But Trump has pulled out of the Paris deal and denounced the Iran pact.