Trump misplaced the blame for what ails the coal industry. 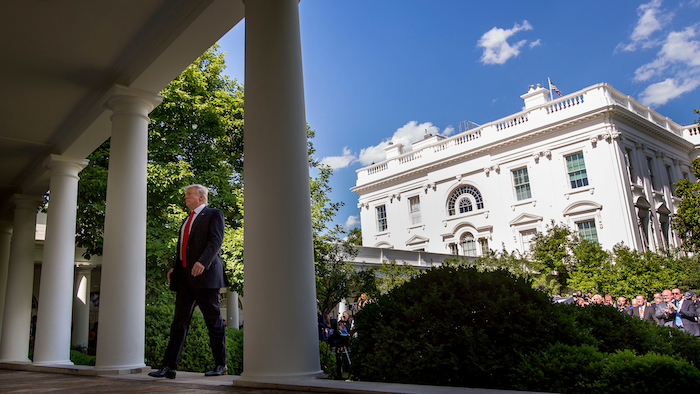 President Donald Trump walks to the Oval Office of the White House in Washington, Thursday, June 1, 2017, after speaking in the Rose Garden about the US role in the Paris climate change accord.
AP Photo/Andrew Harnik

WASHINGTON (AP) — Announcing that the U.S. will withdraw from the Paris climate accord, President Donald Trump misplaced the blame for what ails the coal industry and laid a shaky factual foundation for his decision. A look at some of the claims in a Rose Garden speech and an accompanying fact sheet about the deal to curtail emissions responsible for global warming:

WHITE HOUSE: The Paris climate accord "would effectively decapitate our coal industry, which now supplies about one-third of our electric power."

THE FACTS: The U.S. coal industry was in decline long before the Paris accord was signed in 2015. The primary cause has been competition from cleaner-burning natural gas, which has been made cheaper and more abundant by hydraulic fracturing. Electric utilities have been replacing coal plants with gas-fired facilities because they are more efficient and less expensive to operate.

THE FACTS: That's basically right, but he earns no credit for jobs created in the months before he became president. To rack up that number, the president had to reach back to October. Even then, private-sector job creation from October through April (171,000 private-sector jobs a month) lags just slightly behind the pace of job creation for the previous six months (172,000), entirely under President Barack Obama.

TRUMP: "I was elected to represent the citizens of Pittsburgh, not Paris."

THE FACTS: That may be so, but Allegheny County, which includes Pittsburgh, is not Trump country. It voted overwhelmingly for Hillary Clinton in November, favoring her by a margin of 56 percent to Trump's 40 percent. The city has a climate action plan committing to boost the use of renewable energy. Pittsburgh Mayor Bill Peduto, a Democrat, has been an outspoken supporter of the Paris accord, and tweeted after Trump's announcement that "as the Mayor of Pittsburgh, I can assure you that we will follow the guidelines of the Paris Agreement for our people, our economy & future."

WHITE HOUSE: "According to a study by NERA Consulting, meeting the Obama administration's requirements in the Paris Accord would cost the U.S. economy nearly $3 trillion over the next several decades. By 2040, our economy would lose 6.5 million industrial sector jobs — including 3.1 million manufacturing sector jobs."

THE FACTS: This study was paid for by two groups that have long opposed environmental regulation, the U.S. Chamber of Commerce and the American Council for Capital Formation. Both get financial backing from those who profit from the continued burning of fossil fuels. The latter group has received money from foundations controlled by the Koch brothers, whose company owns refineries and more than 4,000 miles of oil and gas pipelines.

The study makes worst-case assumptions that may inflate the cost of meeting U.S. targets under the Paris accord while largely ignoring the economic benefits to U.S. businesses from building and operating renewable energy projects.

Academic studies have found that increased environmental regulation doesn't actually have much impact on employment. Jobs lost at polluting companies tend to be offset by new jobs in green technology.

WHITE HOUSE, citing a study from the Massachusetts Institute of Technology: "If all member nations met their obligations, the impact on the climate would be negligible," curbing temperature rise by "less than .2 degrees Celsius in 2100."

THE FACTS: The co-founder of the MIT program on climate change says the administration is citing an outdated report, taken out of context. Jake Jacoby said the actual global impact of meeting targets under the Paris accord would be to curb rising temperatures by 1 degree Celsius, or 1.8 degrees Fahrenheit.

"They found a number that made the point they want to make," Jacoby said. "It's kind of a debate trick."

One degree may not sound like much, but Stefan Rahmstorf, a climate scientist at the Potsdam Institute in Germany, says, "Every tenth of a degree increases the number of unprecedented extreme weather events considerably."