A typical can of tuna today costs about $1.50 and the U.S. Department of Justice says that price may be the result of price fixing by Thai, South Korean and U.S. seafood dealers. 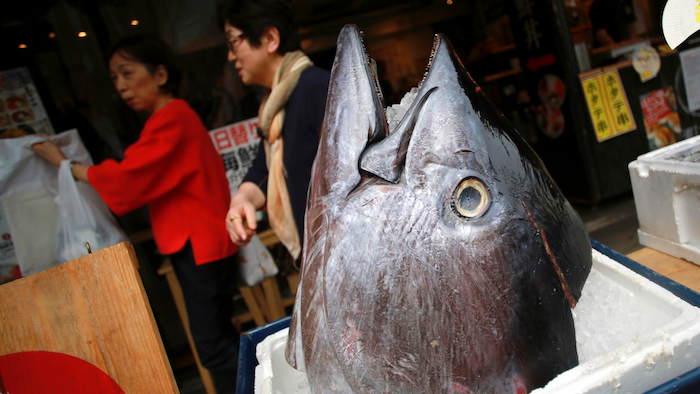 Customers walk past the head of a bluefin tuna in front of a seafood restaurant at Tsukiji fish market in Tokyo Tuesday, May 16, 2017. Criminal and civil cases allege executives at the largest canned tuna companies were agreeing to collectively raise prices and limit promotions. Major retailers are taking aim at the most popular tuna brands in the U.S. - Chicken of the Sea, Bumble Bee and StarKist - saying they conspired to keep prices high for consumers.
AP Photo/Eugene Hoshiko

BANGKOK (AP) — Executives of the most popular tuna brands in the U.S. — Chicken of the Sea, Bumble Bee and StarKist — conspired regularly to keep prices high for consumers with a taste for one of America's favorite sandwich ingredients, according to criminal and civil court records updated this week.

A typical can of tuna today costs about $1.50 and the U.S. Department of Justice says that price may be the result of price fixing by Thai, South Korean and U.S. seafood dealers, while major retailers are suing alleging they've been ripped off.

Together the companies supply about 80 percent of the $1.7 billion of canned tuna sold annually in the United States, according to the court records.

Following up, Walmart and other top retailers filed civil lawsuits.

Those cases were updated this week with an appendix first reported by Undercurrent News that singles out dozens of tuna executives, roping in some of the wealthiest businessmen in Thailand, where Chicken of the Sea's parent company Thai Union is based.

"Thai Union does not comment on ongoing legal matters," the company said in a statement. The other firms did not respond immediately for requests for comment.

The litigation describes regular telephone calls and meetings where "executives agreed that all three companies would collective raise prices." They also agreed to "limit promotions and packaged tuna that undercut their published pricing," according to court records.

Thai Union's president and CEO Thiraphong Chansiri, his father Kraisorn Chansiri and dozens of other Thai and American executives are now identified specifically in the ongoing case. Thai Union owns Chicken of the Sea, Red Lobster and U.S. Pet Nutrition, among other companies. In-Gu Park, acting president of South Korea-based Dongwon Enterprise, which owns StarKist, and Chris Lischewski, president and CEO of San Diego-based BumbleBee also were named in the court records.

Although fewer Americans eat tuna every year, it's still a mainstay in most kitchens and the country's favorite type of fish. Canned tuna was popularized during World War 1, when it was a convenient protein for troops who returned home and continued to ask for it.

Last week in the criminal case in San Francisco, Bumble Bee Foods said it would plead guilty to a felony charge of conspiring to fix the prices of canned and pouched tuna, and pay a $25 million fine. The announcement came after two Bumble Bee executives, senior vice-presidents Ken Worsham and Walter Scott Cameron, also pleaded guilty. They agreed to cooperate with authorities in the ongoing investigation, and face jail time and fines.

The FBI and Justice Department said their investigation into packaged seafood is aimed at protecting consumers who deserve competitive prices.