Want to Own a Town? 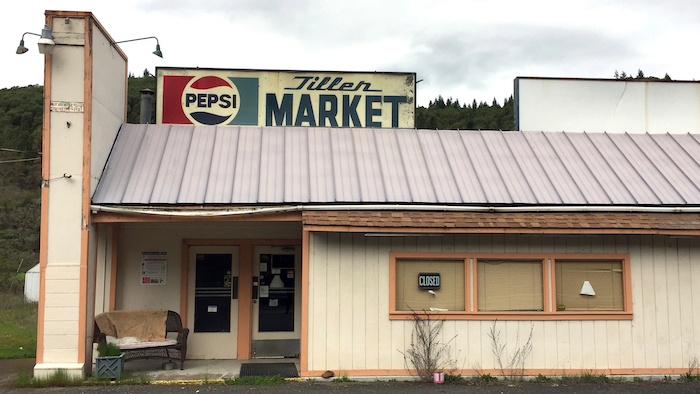 In this April 5, 2017 photo, the Tiller Market stands abandone. Tiller, a dot on a map in remote southwestern Oregon, is for sale for $3.5 million, including the market, and the elementary school is for sale separately for $350,000. A potential buyer has come forward but is remaining anonymous -- and back-up offers are still being accepted.
(AP Photo/Gillian Flaccus)

TILLER, Ore. (AP) — In the tiny, dying timber town of Tiller, the old cliche is true. If you blink, you might actually miss it. But these days, this dot on a map in southwestern Oregon is generating big-city buzz for an unlikely reason: Almost the entire town is for sale.

The asking price of $3.5 million brings with it six houses, the shuttered general store and gas station, the land under the post office, undeveloped parcels, water rights and infrastructure that includes sidewalks, fire hydrants and a working power station. Tiller Elementary School, a six-classroom building that closed in 2014, is for sale separately for $350,000.

Potential buyers have come forward but are remaining anonymous, and backup offers are still being accepted.

The listing represents a melancholy crossroads for Tiller, a once-bustling logging outpost that sprang up after the turn of the last century deep in what is now the Umpqua National Forest, about 230 miles south of Portland. The post office opened in 1902, and miners, loggers, ranchers and farmers flocked to the community along a pristine river.

By the 1940s and 1950s, there were three timber mills running, and the town expanded the elementary school and built a new general store.

Then, nearly three decades ago, logging on the federal forest lands that encircle Tiller came to a near standstill because of environmental regulations. The mills closed, and families moved away. One longtime resident began buying up properties. When he died three years ago, the family owned much of the town.

Then the Tiller Elementary School closed and was up for sale, as well as a small market, and the man's estate bought those too — and the potential became clear.

The listing includes more than 256 acres (1 square kilometer) in 29 distinct parcels, water and timber rights, and a variety of zonings, from residential to industrial.

About 235 people still live in the unincorporated area around Tiller, and have long relied on the buildings now for sale along historic Highway 227 as a gathering spot, and one of the only places to shop for groceries in miles.

"Between the dying economy and the dying owners, Tiller became a new opportunity that had never been available before," said Richard Caswell, executor of the estate. "I started getting inquiries from all over the world, essentially, 'What was it? And what could you do with it?' It's the buyer and their imagination that's going to determine what Tiller can become."

The potential buyers have said through the seller's broker that they intend to turn the school into some type of campus and create a "permaculture" development that respects the town's remaining residents and its picturesque setting in a bend in the emerald-tinted South Umpqua River. They want to make reopening the market a priority.

"The buyers understand that they only have one shot at a first impression," said Garrett Zoller, principal broker for LandandWildlife.com, the seller's realtor. "They want to address this project with the community in mind."

Beyond that, Tiller's future remains shrouded in mystery. The downtown is a ghost town, but plenty of people still live tucked into the mountains in a region where bears wander onto porches and where picking up a cellphone signal takes a 30-minute drive.

Residents gather at the church for coffee and cinnamon rolls on Fridays and collect their mail at the one-room post office — when it's open. Some have a sense of humor: A small, weathered sign affixed to the defunct market reads, "Last one out of Tiller turn out the light."

Sarah Crume and a few other mothers cling to a sense of community by meeting with their young children for playtime at the church, one of the few places not for sale. She's raising five daughters here and had to send her younger children to school in the next closest town when Tiller Elementary shut down.

"It is a little scary, especially raising our kids in this place that we love," Crume said. "I'm just wondering what kind of impact it's going to have on the people."

Paula Ellis grew up in Tiller on a ranch and spent her childhood hunting and riding horses here. Her daughters' beds are decorated with the skins of bears they killed when they were teenagers, and the antlers of the first deer Ellis bagged hangs on a wall near the front door.

She met her husband at the elementary school and recalls the annual end-of-the-year contests for the children that were dubbed the Tiller Olympics. A giant cross rises over her home from an adjacent hilltop, and Ellis lately has found herself praying. "If you do choose to live here and raise kids here, it's a community you fall in love with," Ellis said, wiping away tears. "And we don't want to lose that."

For Rosemary Klep, news of the sale brought on strong emotions. Her parents built the market that's now for sale in 1947, and she grew up camping and roaming the forests near town. Her family had the only telephone in Tiller and, for a while, the only TV.

"This town has been in dire straits for many, many years," said Klep, 72, who now lives near Olympia, Washington. "But we loved growing up there. To us, it was a paradise."