Yesterday was the 90-day mark and no plan has been presented. 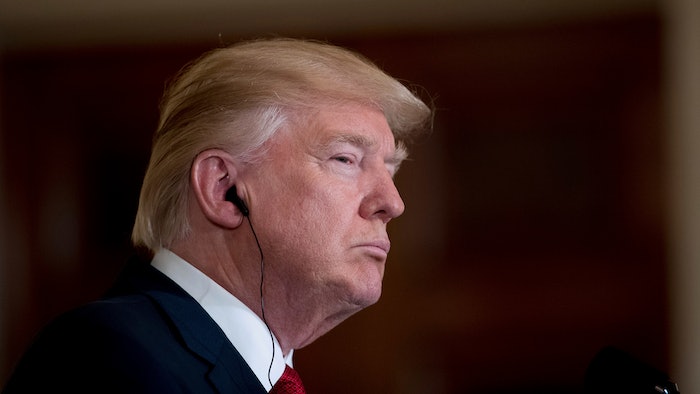 President Donald Trump listens as Italian Prime Minister Paolo Gentiloni speaks during a news conference in the East Room of the White House in Washington, Thursday, April 20, 2017. After a receiving a U.S. intelligence assessment on Russian’s interference in last year’s elections, Trump vowed that he would have a team present him a review of the nation’s cybersecurity efforts within 90 days of taking office. But Thursday was the 90-day mark and no plan has been presented.
AP Photo/Andrew Harnik

WASHINGTON (AP) — After a receiving a U.S. intelligence assessment on Russian's interference in last year's elections, President Donald Trump vowed that he would have a team present him with a review of America's cybersecurity efforts within 90 days of taking office.

But Thursday was the 90-day mark and no plan has been presented. The missed target date, one of several blown deadlines in the administration's first months, has resulted in uncertainty as to who is running the cyber review and when it might be completed. The White House insisted Thursday that a plan was in the works but did not offer any timetable.

"The president has appointed a diverse set of executives with both government and private sector expertise who are currently working to deliver an initial cybersecurity plan through a joint effort between the National Security Council and the Office of American Innovation," said spokeswoman Lindsey Walters.

She did not address why the deadline was missed.

There was no ambiguity to Trump's meaning in January just days before taking office. He had just received an intelligence briefing about Russian hacking and declared that "whether it is our government, organizations, associations or businesses, we need to aggressively combat and stop cyberattacks."

"I will appoint a team to give me a plan within 90 days of taking office," he continued. "The methods, tools and tactics we use to keep America safe should not be a public discussion that will benefit those who seek to do us harm. "

A week later he followed up with a tweet, declaring "My people will have a full report on hacking within 90 days!"

The president appeared to put some teeth behind that promise in the first weeks of his term, convening a cybersecurity panel on Jan. 31 that included former New York City Mayor Rudy Giuliani. Giuliani, a top campaign adviser who was passed over to be secretary of state, was assigned with building private sector partnerships on cybersecurity.

"We must protect federal networks and data. We operate these networks on behalf of the American people and they are very important," Trump said.

But an executive order on cybersecurity planned for later that day was abruptly scuttled without explanation.

Since then, work on the task force has appeared to be haphazard at best. And the subject of election hacking is an awkward one for Trump since U.S. intelligence agencies have concluded that the Russians' interference was an attempt to help the Republican businessman win in November.

Trump has tweeted occasionally about needing to investigate the Russian meddling but has spent more time making unfounded accusations of American surveillance on himself and his team by President Barack Obama's administration. Meanwhile, more contacts between Trump aides and Russian officials have emerged, including those that forced the resignation of National Security Adviser Michael Flynn.

Giuliani is not involved in the review and it was not clear if the NSC or the Office of American Innovation — the task force to modernize government led by powerful Trump aide Jared Kushner — would be taking the lead on the project.

This is hardly the first time the Trump administration has missed a deadline.

The president had vowed to "repeal and replace Obamacare" on the first day of his administration but the White House's health care bill flat-lined in Congress last month. Trump had pledged to reveal a plan to defeat ISIS within 30 days of taking office but that did not emerge either. And he vowed to immediately label China as a currency manipulator only to reverse himself last week.