WASHINGTON (AP) — The Trump administration intends to propose a package of tax breaks meant to help spur $1 trillion in new spending on roads, bridges and other construction over the next decade. But as part of that bill, Trump also wants introduce measures to drastically shorten approval times for projects.

The strategy appears aimed at building support for an effort with little momentum in Congress. Democrats are critical of Trump's focus on public-private partnerships, rather that more traditional funding, while many conservative Republicans have balked at the idea of a massive government investment.

Trump, a former real estate executive who claims a passion for building, is looking for enticements that might bring his party on board.

His National Economic Council is currently crafting changes to the law to speed up the regulatory process, so that construction could start sooner and builders would find it easier to finance projects.

Trump and his Transportation Secretary Elaine Chao have played up the problem of regulatory hurdles for infrastructure.

"We're going to try and take that process from a minimum of 10 years down to one year," the president said at an event earlier this month. On Tuesday, the president hosted a gathering of business leaders to discuss infrastructure and regulations, among other subjects.

But the measures being considered for Trump's infrastructure package would follow a series of streamlining efforts that began under President Barack Obama.

At the end of 2015, Obama signed a measure called the FAST Act. Its title stands for "Fixing America's Surface Transportation." In addition to providing funds for infrastructure through 2020, the law established the steering council that reviews the permitting process to ensure projects were reviewed in a timely manner. The law also put limits on the environmental reviews which in theory should shorten a process that could cause permitting to drag on well beyond five years.

Some business groups say the Obama-era law is working and see little reason for an aggressive overhaul.

"You've got it down to a process that is two and a half years," said Bill Kovacs, a senior vice president for environment, technology and regulatory affairs at the U.S. Chamber of Commerce.

Kovacs added that it was uncertain as to how much more the government could shrink the timeline while still conducting reviews "to make sure there is no harm to the environment."

The Business Roundtable, a trade association for CEOs, sent a letter last week to Gary Cohn, the president's top economic adviser, saying Trump already had the authority under this law to cut permitting times for infrastructure but it had yet to be "fully implemented."

While the reforms are not "perfect," the group wrote, "if implemented aggressively, they may be able to deliver the timelines and certainty in the permitting process" that Trump seeks.

The White House has not decided whether it intends to revisit the FAST Act. An official, who asked for anonymity to discuss the private discussions, said the president believes infrastructure permitting could be event faster.

Trump last week criticized his predecessor for devoting money to infrastructure and claimed "nobody ever saw anything being built." The comment appeared to ignore the consider spending on infrastructure reparis in his hometown, including $30 million in repairs and repainting of the Brooklyn Bridge and more than $80 million earmarked for Moynihan Station, an annex to Penn Station that is meant to return the rail hub to the grandeur of the original Penn Station.

Trump's budget blueprint would eliminate the TIGER grant program for infrastructure projects that has its roots in the 2009 stimulus approved by Obama during the Great Recession.

While the status of the steering council created by the FAST Act is unclear, the administration intends to rely on billionaire real estate developers Richard LeFrak and Steven Roth for informal advice about repairing infrastructure. Trump has previously suggested that the pair would help oversee a new commission to evaluate spending on infrastructure projects.

But for now, LeFrak and Roth appear to have far more limited roles.

They will, instead, consult from time to time with the recently announced White House Office of American Innovation that is being led by Trump son-in-law Jared Kushner, according to the White House official. 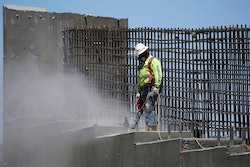 Trump to Highlight Infrastructure This Week 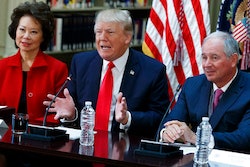 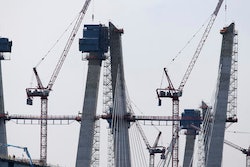 Will Trump Live Up to His Infrastructure Promises?