Rolando Pablos, the Texas secretary of state, said Texas-Mexico trade accounts for nearly $200 billion annually and that there is a "shared destiny" through deep family and cultural connections.

Will Weissert
Carlos Gonzalez Gutierrez, center, Mexico's consul general in Austin, waits to give testimony to the Committee on International Trade and Intergovernmental Affairs at the Texas Capitol, Monday, March 6, 2017, in Austin, Texas. Officials from Mexico and Texas are urging the state's lawmakers to defend the North American Free Trade Agreement against President Donald Trump's administration, which has been wary of it.
AP Photo/Eric Gay

AUSTIN, Texas (AP) — Texas has benefited from the North American Free Trade Agreement more than anywhere else in the U.S. and should defend the pact against attempts by Donald Trump's administration to undermine it, officials from the state and Mexico said Monday.

Rolando Pablos, the Texas secretary of state, and Carlos Gonzalez Gutierrez, Mexico's consul general in Austin, spoke to legislators during a hearing at the state Capitol. The comments underscore the dilemma facing many top Republicans who don't want to openly defy Trump but oppose some of the anti-Mexican trade policies he has advocated.

Pablos said Texas-Mexico trade accounts for nearly $200 billion annually and that there is a "shared destiny" through deep family and cultural connections.

"It is so crucial that we continue to strengthen ties," said Pablos, who was appointed by Republican Gov. Greg Abbott in January and traveled to Mexico City last week to reassure officials there is "no stronger partnership than the one between Texas and Mexico."

Gonzalez Gutierrez said that since NAFTA was negotiated in 1993, U.S.-Mexico trade increased six-fold to $584 billion in 2015. He said his country is now the leading trade partner for 25 states but "Texas is in a completely different league."

"If Texas is the biggest winner in NAFTA, Texas must be its No. 1 champion," Gonzalez Gutierrez told state lawmakers, adding that if the agreement collapsed the U.S. would lose exports to Mexico worth a total of about 1.3 percent of the value of the nation's gross domestic product — but Texas would sustain losses equal to 6 percent of its statewide gross domestic product.

"It is imperative for Texas to take the lead and frame the terms of the debate around NAFTA," Gonzalez Gutierrez said.

Some state leaders have expressed concerns about dismantling NAFTA, Trump's plan to build a wall along the nearly 2,000-mile U.S.-Mexico border and a GOP plan in Congress slapping a 20 percent tax on all imported goods.

'The potential damage to the Texas economy is catastrophic," Rep. Rafael Anchia, a Democrat from Dallas, said Monday.

Gonzalez Gutierrez said Mexico isn't opposed to renegotiating NAFTA, especially to update agreements on energy, the service sector and Internet-based commerce, as well as exploring whether U.S. insurance companies can facilitate "medical tourism" where Americas head to Mexico for cheaper health care. But Trump has gone well beyond suggesting simple tweaks, calling the agreement the "worst trade deal ever approved in this country."

John Cornyn, the Republican majority whip in the U.S. Senate, used an op-ed last week to urge the new administration to improve, not scrap, NAFTA.

"Trade has been a cornerstone of the Texas economy, with no partner more important than Mexico," Cornyn wrote.

Other red states have worried about an economic tailspin the White House's anti-NAFTA rhetoric could spark, including in Arizona, where Sen. John McCain has said he's "deeply concerned" about any plan renegotiating the pact.

Such jitters stretch beyond the border, too. Mexican Economy Secretary Ildefonso Guajardo was in Detroit last week opposing import tariff plans. Auto executives and economists there worried that major NAFTA changes, or stiff tariffs, would wreak havoc on the industry, which relies on parts-supply and auto-assembly factories in Mexico thanks to NAFTA.

Still, some Texans said they want to give Trump the benefit of the doubt — for now.

"I feel confident that, at the end of the day, Texas trade with Mexico will be protected," state Rep. Tan Parker, a Republican from Flower Mound, outside Dallas, said Monday. "Really, what we're seeing at this point is early dialogue on this topic." 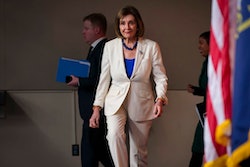 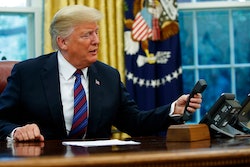 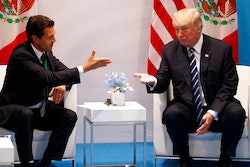