Two industry groups are calling on Trump to pave the way for the pipeline's completion.

BISMARCK, N.D. (AP) — Industry leaders are urging President-elect Donald Trump to make approval of the disputed Dakota Access oil pipeline a priority when he takes office next month, but a spokesman for Trump isn't offering many clues about how the incoming president might act.

Meanwhile, the leader of the Standing Rock Sioux is calling on pipeline opponents to leave a camp in southern North Dakota where they've been protesting for months, as dangerous winter weather sets in. Many are vowing to stay, however.

Here's a guide to the latest developments and key background about the protest:

Two industry groups are calling on Trump to pave the way for the pipeline's completion when he enters the White House in January. The requests come after the Army declined to issue a permit for the $3.8 billion pipeline to cross under a Missouri River reservoir in southern North Dakota near the Standing Rock Sioux Reservation.

The American Petroleum Institute represents the U.S. oil and natural gas industry, and the MAIN Coalition is made up of agriculture, business and labor entities that benefit from Midwest infrastructure projects.

Trump supports construction of the pipeline, spokesman Jason Miller told The Associated Press on Monday, but Miller wouldn't say whether Trump would reverse the Army's decision. Miller said the Trump administration will review the situation "and make the appropriate determination."

Trump holds stock in Energy Transfer Partners. Pipeline opponents worry that Trump's investments could affect any decision he makes on the project as president.

The Army on Sunday said it would not approve an easement for a pipeline crossing beneath Lake Oahe, a Missouri River reservoir and the source of drinking water for the nearby Standing Rock Reservation. The Standing Rock tribe says the pipeline threatens its water and cultural sites.

Assistant Army Secretary for Civil Works Jo-Ellen Darcy said her decision was based on the need to consider alternative routes.

Protesters, who describe themselves as "water protectors," say they have no plans to leave despite the Army's decision and recent wintry storms. Standing Rock Chairman Dave Archambault said Monday that he doesn't think there will be any developments for months and that people should go home.

Energy Transfer Partners got federal permits for the pipeline in July, about two years after it was announced. The pipeline is projected to move a half-million barrels of crude oil daily to an existing pipeline in Patoka, Illinois, for shipment to Midwest and Gulf Coast markets.

Supporters say the pipeline will have safeguards against leaks, and is a safer way to move oil than trucks and trains, especially after a handful of fiery — and sometimes deadly — derailments of trains carrying North Dakota crude.

The Standing Rock Sioux, whose reservation straddles the North Dakota-South Dakota border, have challenged the Army Corps of Engineers' decision to grant permits at more than 200 water crossings. A federal judge in September denied the tribe's request to block construction of the entire pipeline.

The pipeline is largely complete except for the section under Lake Oahe, about a mile upstream of the reservation.

The tribe argues putting the pipeline there could affect drinking water for more than 8,000 tribal members and millions downstream. The Corps of Engineers granted Energy Transfer Partners the permits needed for the crossing in July, but the federal government decided in September that further analysis was warranted given the tribe's concerns. Then came Sunday's decision from the Army, which oversees the Corps.

The company responded by asking U.S. District Judge James Boasberg to declare that it has the right to lay pipe under Lake Oahe. The judge isn't likely to issue a decision until January at the earliest.

Obama raised the possibility of rerouting the pipeline in early November, and Archambault has said that would be acceptable to the tribe provided the new route isn't near the reservation and doesn't cross the Missouri River. But Energy Transfer Partners CEO Kelcy Warren told The Associated Press that that the pipeline won't be rerouted and the company has no alternative than to stick to its plan. 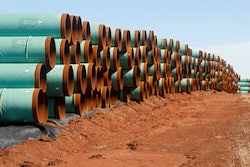