Obama Will Face Questions About Trump on Last Major Trip

He will likely address everything from the state of the Trans-Pacific Partnership, to global concerns about the future of America's leadership. 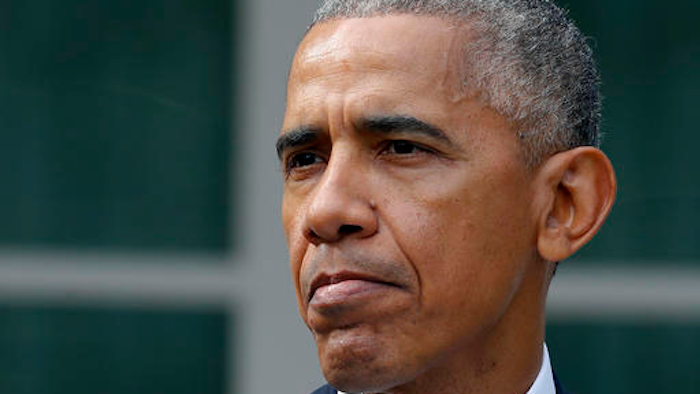 In this Nov. 9, 2016, photo, President Barack Obama pause while speaking in the Rose Garden of the White House in Washington. It was supposed to be his grand valedictory tour. Now Obama must use his last major trip abroad to try to calm shocked world leaders about the outcome of the U.S. election, and what comes next when Donald Trump is president.
AP Photo/Pablo Martinez Monsivais

WASHINGTON (AP) — It was supposed to be his grand valedictory tour. Now President Barack Obama must use his last major trip abroad to try to calm shocked world leaders about the outcome of the U.S. election, and what comes next when Donald Trump is president.

Trump's unforeseen victory has triggered pangs of uncertainty at home and grave concerns around the world. Though Obama has urged unity and said the U.S. must root for Trump's success, the president's trip to Greece, Germany and Peru forces him to confront global concerns about the future of America's leadership. Obama departs Monday on the six-day trip.

Before leaving the U.S., Obama faces reporters at an afternoon White House news conference, with questions about the presidential election and its consequences for U.S. policy and Obama's own legacy certain to be a focus.

Obama's trip, planned when it seemed certain Hillary Clinton would win, had been designed to reassure the world that the U.S. had regained its footing after a toxic campaign that unnerved foreign capitals, noted Heather Conley, a Europe scholar at the Washington-based Center for Strategic and International Studies.

"Now the president has the unenviable task of telling his counterparts and explaining what Europeans are now coining 'the Trump effect,'" Conley said.

For months, Obama lent credence to those concerns as he urged Americans to reject Trump. Standing alongside Singapore's prime minister in August, Obama said Trump was "woefully unprepared" because he lacked "basic knowledge" about critical issues in Europe, Asia and the Mideast. And during a visit to Japan, Obama said he wasn't the only world leader worried about Trump.

"They're rattled by him, and for good reason," Obama said in May. "Because a lot of the proposals that he's made display either ignorance of world affairs, or a cavalier attitude, or an interest in getting tweets and headlines instead of actually thinking through what it is that is required to keep America safe and secure and prosperous, and what's required to keep the world on an even keel."

Now, Obama must reassure the U.S. and other countries that somehow, it will all be OK.

Ben Rhodes, Obama's deputy national security adviser, said the president fully expects Trump's election to be a dominant theme of the trip, but would emphasize his plans to keep carrying out his approach until Trump takes over. He said Obama would argue that basic U.S. principles like honoring treaty commitments have historically survived even the most dramatic changes of administrations.

"He'll want to use these conversations with leaders to express that view that given all the important issues that we face, no matter what our preferred choice may have been in the election, right now we as Americans have a stake in seeing this next administration succeed," Rhodes said.

On his trip, Obama is stopping first in Athens, where he'll tour the Parthenon, meet with the prime minister, and give a speech about democracy and globalization that will take on new relevance in light of Trump's election. He'll use his visit to Berlin to show gratitude to German Chancellor Angela Merkel, his closest foreign partner, and to meet with key European leaders.

For the most part, foreign leaders have politely if cautiously congratulated Trump on his victory. A few have been more effusive, including Russian President Vladimir Putin, whose perceived sympathies for Trump became an election issue and who now says he wants to fully restore U.S. relations under President Trump.

In Europe, where Obama has sought unity with allies to counter Russia's growing influence, NATO members are alarmed by Trump's suggestions that the U.S. might pull out of the alliance if other countries don't pay more. Many of the same nations are wrestling with whether last year's historic climate change deal can be salvaged after Trump's threats to pull the U.S. out.

Conversely, Trump's "America first" motto has resonated deeply with nationalists and skeptics of globalization who see Trump as a kindred spirit. Trump had dubbed himself "Mr. Brexit" after the U.K.'s vote to leave the European Union.

America's Mideast allies are unsure what Trump's victory means for the nuclear deal with Iran, a foe of U.S. partners Saudi Arabia and Israel, considering Trump's repeated but vague pledges to renegotiate that deal. And misgivings about Trump will certainly follow Obama to Latin America, where Trump has turned off many with his hard-line immigration stance and description of Mexican immigrants as criminals and rapists.

Asian leaders who painstakingly negotiated a landmark free trade deal with the U.S. are swallowing the reality that Congress will not approve the Trans-Pacific Partnership any time soon. Obama planned to meet with TPP country leaders in Peru, but the White House acknowledged the deal is all but dead because Senate Majority Leader Mitch McConnell has ruled out a vote on it before Trump takes office.

Trump is vehemently opposed to TPP and similar deals. That could benefit China, which is eager to fill any void in regional leadership left by a U.S. withdrawal and has its own competing free trade scheme. Yet Beijing has reason to be wary, too: Trump has threatened a trade war with China and vowed to go after the Asian powerhouse for what he deems currency manipulation.