The campaign to give workers paid time off when they're sick is picking up momentum. 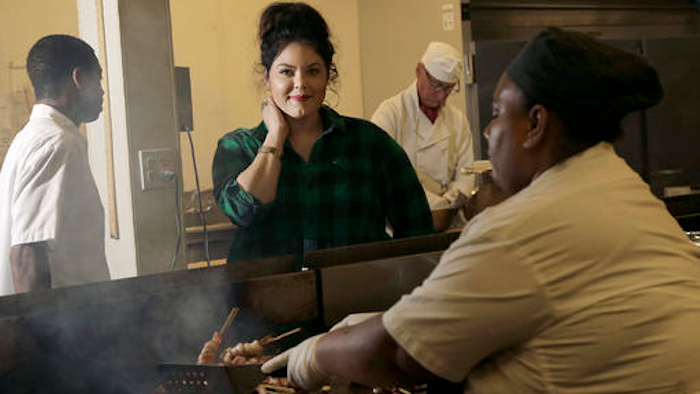 In this Wednesday, Sept. 28, 2016, photo, Olivia Colt, owner of catering company Salt & Honey, center, poses for photos as members of her cooking staff work in the kitchen in Berkeley, Calif. The campaign to give workers time off when they’re sick is picking up momentum. Before California enacted its law, Colt had given paid leave to her salaried managers as a way to retain employees in an industry with high turnover. Now, hourly employees get sick leave as well, accruing one hour for each 30 hours they work. Colt sees several benefits: She has less staff turnover, and her 20 workers take better care of their health.
AP Photo/Jeff Chiu

NEW YORK (AP) — A bill that would give workers for the Illinois county that includes Chicago one hour of paid sick time for each 40 hours they work was up for a vote Wednesday.

Sick leave referendums are on the November ballot in Arizona and Washington state. Proposals are also expected to be voted on soon in Duluth, Minnesota, and Albuquerque, New Mexico, says Ellen Bravo, executive director of Family Values @ Work, an organization that advocates for paid sick leave.

Most companies do give their employees paid time off when they're sick. The Labor Department estimates that last year, 61 percent of workers in private companies got sick time averaging six to 10 days a year. But there's no federal law mandating that all companies give staffers paid leave, and those businesses that don't tend to be very small, often with blue-collar workers.

The move toward paid sick leave has accelerated in the last three years as 30 states, counties and cities approved laws, according to Bravo's group. All told, 37 jurisdictions have such laws, starting with San Francisco in 2006 and now other places like New York, Chicago, Washington, D.C., Philadelphia, Pittsburgh, Seattle, Los Angeles, San Diego and Minneapolis-St. Paul. Connecticut, California, Massachusetts, Oregon and Vermont also have laws.

These measures tend to have an impact at smaller companies that are less likely than mid-size or large enterprises to offer sick leave. They generally allow workers to accrue sick time according to the number of hours they work each week. Many grant workers five days off a year.

Before California enacted its law, caterer Olivia Colt had given paid leave to her salaried managers as a way to retain employees in an industry with high turnover. Now, hourly employees get sick leave as well, accruing one hour for each 30 hours they work. Colt, the owner of Salt & Honey in Berkeley, sees several benefits: She has less staff turnover, and her 20 workers take better care of their health.

"They're not coming to work in the middle of the flu and getting everyone else sick," she says.

But there's opposition to the laws. Some small business advocacy groups say mandatory paid sick leave can drive up companies' expenses — for example, if they have to hire replacement workers. Bills introduced in Congress to mandate paid sick leave have failed. President Barack Obama signed an executive order requiring companies with contracts or subcontracts with the federal government to give workers up to seven paid sick days each year. That order takes effect Jan. 1.

Very small companies with manual or industrial jobs are the most likely to not offer paid sick leave, says David Lewis, CEO of OperationsInc, a human resources provider based in Norwalk, Connecticut. Owners may be cash-strapped.

"A lot of these companies are incapable of offering what they view as a luxury-type of benefit," Lewis says.

Owners with staffers in different states or cities and who are required to provide sick leave in some locations may decide to give everyone the same benefit, even though that may increase expenses.

Emily LaRusch has one employee in California, and 10 scattered among Florida, Texas and Arizona, which don't have sick leave laws. She used to give staffers 10 days off to be used for illness or vacation. In light of the California law, she has added three sick days for everyone.

"If this one person gets preferential treatment for sick time, vacation, I couldn't do it for that one and not for the rest of the team," says LaRusch, owner of Back Office Betties, which provides receptionist services like remote phone answering.

LaRusch says sick time raises her expenses by $4,000 a year, a lot of money for a small company. But she recognizes that by providing sick time, she's making her business more competitive in an industry not known for giving generous benefits.

Rocana, which creates systems to monitor computers and other technology, has about 60 workers in about two dozen states, including some with sick leave laws. The company gives workers unlimited vacation and sick leave — they take as many days as they need, and the company keeps track of what category each one falls into. Managers believe it's a good policy for employee relations, and it has also made it easier to comply with the varying sick leave laws, Chief Financial Officer Steve Wietrecki says.

In places with sick leave laws, companies must also report to the government how much time staffers accrue and take. Giving staffers more time than the law mandates doesn't relieve companies of that duty. Many companies ask their payroll providers to handle the paperwork.

"It's a minor burden," Wietrecki says.