A weekend confrontation between protesters and construction workers near Lake Oahe prompted the Standing Rock Sioux Tribe to ask Sunday for a temporary stop of construction. 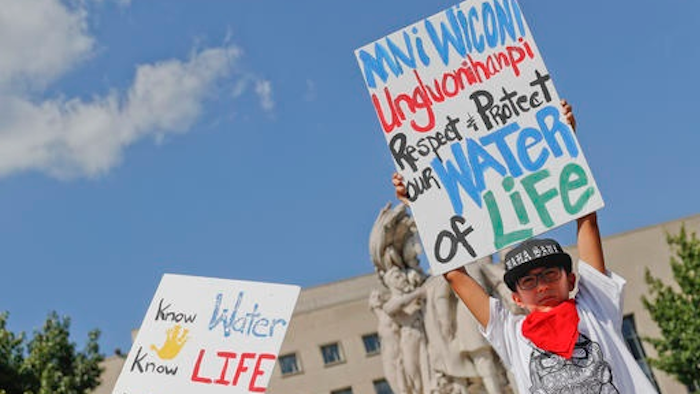 Tusweca Mendoza, 10, of Arlington, Va., originally from Pine Ridge, S.D., holds up a sign outside U.S. District Court in Washington, Tuesday, Sept. 6, 2016, as members of the Standing Rock Sioux Tribe have asked a federal judge to temporarily stop work on parts of the Dakota Access Pipeline to prevent the destruction of sacred and culturally significant sites near Lake Oahe.
AP Photo/Pablo Martinez Monsivais

WASHINGTON (AP) — An American Indian tribe succeeded Tuesday in getting a federal judge to temporarily stop construction on some, but not all, of a $3.8 billion four-state oil pipeline, but its broader request still hangs in the balance.

U.S. District Judge James Boasberg said Tuesday that work will temporarily stop between North Dakota's State Highway 1806 and 20 miles east of Lake Oahe, but will continue west of the highway because he believes the U.S. Army Corps of Engineers lacks jurisdiction on private land.

He also said he will rule by the end of Friday on the Standing Rock Sioux Tribe's challenge of federal regulators' decision to grant permits to the Dallas, Texas-based operators of the Dakota Access Pipeline, which will cross North Dakota, South Dakota, Iowa and Illinois.

A weekend confrontation between protesters and construction workers near Lake Oahe prompted the tribe to ask Sunday for a temporary stop of construction. Four private security guards and two guard dogs received medical treatment, officials said, while a tribal spokesman noted that six people — including a child — were bitten by the dogs and at least 30 people were pepper-sprayed.

Dakota Access attorney Bill Leone said during Tuesday's hearing that if it weren't for the stoppages, the section in question would be finished by the end of this week.

Standing Rock Sioux tribal chairman Dave Archambault II issued a statement after the ruling, saying: "Today's denial of a temporary restraining order ... west of Lake Oahe puts my people's sacred places at further risk of ruin and desecration." Attorney Jan Hasselman with Earthjustice, who filed the broader lawsuit on behalf of the tribe, noted the tribe will "know more by the end of the week about where we're heading."

Leone also said in court that there were two more attacks on crews in North Dakota on Tuesday. Morton County Sheriff Kyle Kirchmeier said law enforcement officers pulled back from responding to a report of 150-200 protesters gathered at a construction area on private land because they determined it wasn't safe to respond.

He said some protesters had hatchets and knives, and two secured themselves to heavy equipment. No pipeline workers were at the site, and no arrests have been made.

"The elders say that reburying can help deal with the loss and hurt of disturbing these graves," he said.

Lawyers for Energy Transfer Partners filed court documents Tuesday morning denying that workers have destroyed any cultural sites and asking the judge to reject the tribes' request for a temporary work stoppage. The company said it "has taken and continues to take every reasonable precaution" to protect cultural sites.

The U.S. Army Corps of Engineers didn't oppose the tribe's most recent request, with Assistant Attorney General John Cruden saying in court documents that "the public interest would be served by preserving peace."

The tribe's outstanding lawsuit attempts to halt construction of the pipeline, which is due to be finished this year. The suit says the project violates several federal laws, including the National Historic Preservation Act, will harm water supplies on the reservation and downstream and disturb ancient sacred sites.

Hundreds of protesters have camped out near the reservation for weeks. Green Party presidential candidate Jill Stein, who advocates for clean energy, spent Monday evening with them and used red spray paint to write "I approve this message" on the blade of a bulldozer, a spokeswoman said.

Kirchmeier said authorities plan to pursue charges of trespassing and vandalism against Stein. State court records Tuesday evening didn't yet list any formal counts against her.