As gas prices have fallen, SUV sales have risen, and that could wind up lowering the averages that automakers are expected to meet. 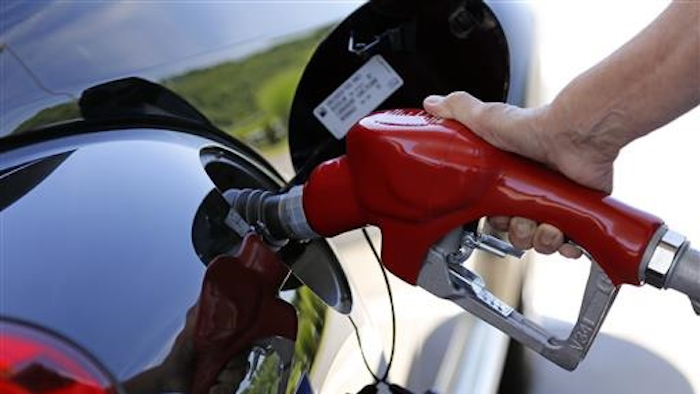 In this Thursday, July 16, 2015, photo, a customer re-fuels her car at a Costco in Robinson Township, Pa. The U.S. government says the fuel economy of the nation’s fleet of cars and trucks likely won’t meet its targets in 2025 because low gas prices have changed the types of vehicles people are buying.
AP Photo/Gene J. Puskar

DETROIT (AP) — The U.S. government says the nation's cars and trucks are well on their way to meeting fuel economy and emissions standards set for 2025, but cheaper gas prices could ultimately lower those targets by encouraging consumers to buy less-efficient vehicles.

A report on the standards was issued Monday by the U.S. Environmental Protection Agency, the U.S. Department of Transportation and the California Air Resources Board. The report kicks off a two-year review that will determine whether to keep the 2025 fuel economy and greenhouse gas emissions targets in place or change them.

The government calculates an automakers' average based on the vehicles it sells. A company could fail to meet standards on pickup trucks but exceed them with fuel-efficient cars and still meet the requirements, said Alan Baum, a consultant in Detroit who advises automakers on fuel-economy regulations. But if it fails to sell those cars, it could wind up being fined.

As gas prices have fallen, SUV sales have risen, and that could wind up lowering the averages that automakers are expected to meet, the report said. The government now forecasts average fuel economy between 50 mpg and 52.6 mpg in 2025, depending on the price of gas.

The report noted that in October 2012, when the fuel economy standards were finalized, U.S. average gas prices were $3.87 per gallon. They ended 2015 at $2.15 per gallon. So far this year, sales of the Toyota Prius hybrid are down 25 percent while sales of SUVs and other light trucks are up 9 percent, according to Autodata Corp.

But gas prices alone aren't likely to convince the government to weaken the standards adopted in 2012. The report says automakers can meet the original 2012 targets by continuing to make more advanced gasoline engines; the EPA says only about 2 percent of vehicles would need to be hybrids or electric vehicles to meet the standards.

The government says 100 car, SUV, and pick-up truck versions on the market today already meet fuel economy standards targeted for 2020 or later. Automakers also have been making more use of lightweight materials, like aluminum, and improving vehicles' aerodynamics. They're also adding features like stop-start technology, which automatically shut down the engine and save fuel while a vehicle is stopped in traffic.

Those advances come at a cost. The EPA estimates the fuel economy standards will cost $1,017 per vehicle between 2021 and 2025, while NHTSA estimates they will cost up to $1,245 per vehicle. The agencies differ on how much consumers would save in gas, but they estimate it's between $680 and $1,620 per vehicle.

Those costs, and consumers' reluctance to buy the smallest, most fuel-efficient vehicles, mean the auto industry will likely argue that the standards should be relaxed. The Alliance of Automobile Manufacturers, a lobbying group that represents 12 automakers, including BMW, Toyota and General Motors, says meeting the standards is "a daunting challenge."

"Absent a vigorous commitment to focus on marketplace realities, excessive regulatory costs could impact both consumers and the employees who produce these vehicles," the alliance said in a statement.

But environmental groups will urge the government to strengthen the standards. In a statement, Sierra Club President Andrew Linhardt said the report proves that the standards are working.

"Due to technological innovation, our cars are cleaner and more efficient than ever before," he said.