China is a potential winner if Britain and the European Union rework trade deals and look for investors after a British exit. 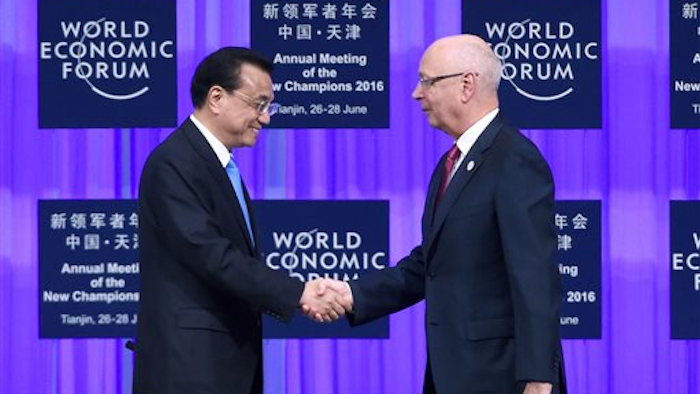 BEIJING (AP) — Beijing faces a blow from weaker European demand for its exports and pressure to hold its yuan steady in turbulent currency markets. But economists and political analysts say if Britain and the EU split, both sides will look to cash-rich Chinese companies that are expanding abroad — with the possible bonus for Beijing of closer political ties.

"One of the benefits China can gain from 'Brexit' is a stronger and closer economic relationship with the U.K. and even with the EU," said Zhang Lihua, director of the Center for China Europe Relations at Tsinghua University in Beijing. "Both the U.K. and the EU need that kind of cooperation with China under the current circumstances."

Chinese leaders urged Britain to stay in the 28-nation EU and have avoided mentioning possible benefits of a split.

On Monday, Premier Li Keqiang, the country's top economic official, said Beijing wants to see a "united and stable" EU and a "stable and prosperous" Britain — a possible reference to concern the vote might inspire separatist sentiment in other EU members or parts of the United Kingdom.

"We are seeing increasing uncertainties in the world economy," Li said in a speech at the World Economic Forum in the eastern city of Tianjin. "We need to jointly handle challenges, strengthen confidence and create a stable international environment."

Europe is China's biggest trading partner, and Chinese investors already see the region as more welcoming than the United States, where some acquisitions have been stymied by security concerns.

Chinese companies own France's Club Med, the makers of Pirelli tires, Volvo cars and Weetabix cereal and football teams Inter Milan of Italy and Aston Villa of Britain. London is the second-biggest center outside mainland China for settling transactions valued in Beijing's yuan.

"China will benefit from industrial development experience in the U.K.," said Lu. "I do recommend seizing the opportunity to establish China-U.K. free trade to enhance bilateral cooperation between the two countries."

"The U.K. and the EU may become more friendly with China politically, but this is not what China tries to seek," he said.

Dealing separately with the two sides also might allow Beijing to reach agreements that might have been blocked previously by the need for Britain and Europe to agree, said Liu Yuanchun, executive dean of the National Academy of Development and Strategy of Renmin University.

"The political gain for China is bigger than the economic gain," Liu said.

The EU and the United States accuse China of exporting steel at improperly low prices, hurting foreign competitors and threatening thousands of jobs. Washington imposed anti-dumping duties of up to 522 percent but British resistance blocked the EU from imposing higher tariffs.

In the short run, European uncertainty might depress demand for Chinese goods, but trade matters less to China than it did a decade ago. China is the world's biggest trader but exports as a share of the economy declined last year to 22 percent from 2007's 33 percent.

A more serious problem is downward pressure on China's yuan in currency markets, according to economists.

The British pound and the euro currency used by 17 EU countries have sunk relative to the dollar. As currencies of other developing countries also weaken, the Chinese central bank will be forced to decide whether to let the yuan, also called the renminbi, fall with them or stick closer to the dollar.

Last year, the People's Bank of China spent tens of billions of dollars to prop up the yuan after a change in the mechanism used to set its exchange rate allowed it to fall. That fueled expectations that Beijing was weakening the currency to boost exports and prompted investors to move capital out of China.

If the dollar gains against the yuan, "this could set off a renewed bout of fears over renminbi depreciation and a pick-up in capital outflows," Julian Evans-Pritchard and Mark Williams of Capital Economics said in a report.